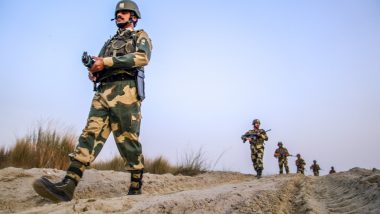 This year, for the first time, BSF will celebrate its raising day in the border area of Jaisalmer in Rajasthan on December 5.

Interacting with Prasar Bharati News Service (PBNS), Director General (DG) of BSF Pankaj Kumar Singh said,” We are going to hold BSF Raising Day in Jaisalmer, for the first time outside of Delhi. We would like to show the people of Rajasthan that - what a wonderful force BSF is and how it is capable of defending the frontier of India - on Land, in waters, and in the air also. BSF Raising Day 2021 Wishes & Images: Netizens Share Photos, Messages, Quotes and Wallpapers to Mark 57th Border Security Force Raising Day.

Further, the DG BSG elaborated about the ‘Border Co-ordination Meeting’ between IsG BSF Meghalaya, Guwahati, Silchar, Tripura & Region Commanders, and Border Guard Bangladesh, which was held from 27 to 29 Nov’ 2021 at Shillong.

He said,” Issues of common interests and concerns are raised in these meetings. We exchanged nefarious elements on each side so that the other forces can help in apprehending them.”

For the 57th Raising Day of BSF celebrations, Union Home Minister Amit Shah will attend the event along with other senior BSF officers.

A peek into the world of BSF

BSF is one of the seven Central Armed Police Forces of India. With the objective to ensure the security of the borders of India, the Border Security Force (BSF) was established on 1st December 1965, after the Indo-Pak and Indo-China wars.

Since independence, the protection of India's international boundaries was the responsibility of local police belonging to each border state. However, during the Indo-Pakistani War of 1965, the inadequacy of the State Armed Police to cope with armed aggression was exposed. So after the end of the war, the government created the Border Security Force as a unified central agency with the specific mandate of guarding India's international boundaries... K F Rustamji, from the Indian Police Service, was the first Director-General of BSF.

BSF is the only paramilitary force in India that has its own marine, air and artillery regiments. It also has a unique Camel wing, specifically trained for desert combat.

BSF is a Union Government Agency under the administrative control of the Ministry of Home Affairs. The BSF has its own cadre of officers but its head, designated as a Director-General on whose uniform you will see a sword and baton which remain in the form of a cross and mark of the national symbol of India.

(The above story first appeared on LatestLY on Dec 01, 2021 11:52 AM IST. For more news and updates on politics, world, sports, entertainment and lifestyle, log on to our website latestly.com).