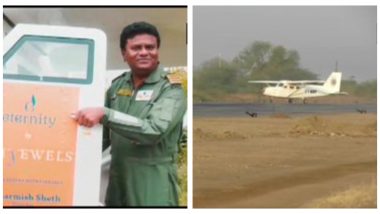 Mumbai, August 15: A six-seater aircraft built by Captain Amol Yadav, a pilot from Mumbai, completed its first flight on Saturday. Various manoeuvre capabilities of the plane were tested during the test flight. The aircraft was built in 2016. Speaking to news agency ANI, Captain Yadav said, "I built this aircraft on my house's terrace. Successfully tested its various manoeuvre capabilities. We've required flying permits." He took 19 years in perfecting the construction of his aircraft. Move Forward with 'Make for World' Mantra Along with 'Make in India': PM Modi.

The aircraft was first exhibited in 2016 under "Make In India" scheme. Captain Yadav added, "Finally, we got the permit to fly in 2019. There are two other tests lined up. This is a very important step to indigenise the aircraft manufacturing industry in India." First Aircrafts Made By Indian Company Will Surely Fly in 2019, Says Captain Amol Yadav.

We exhibited this aircraft in 2016 under Make In India scheme. Finally, we got the permit to fly in 2019. There are two other tests lined up. This is a very important step to indigenise the aircraft manufacturing industry in India: Captain Amol Yadav #Mumbai https://t.co/qZgHJE9jmh

In 2018, the Maharashtra government signed a Memorandum of Understanding ( MoU) with Yadav's company Thrust Aircraft Private Limited in 2018 to set up an indigenous factory for manufacturing 20-seater aircraft in Palghar in a Rs 35,000 crore project. Last year, he also met Prime Minister Narendra Modi.

According to reports, The MoU, between Amol Yadav and MIDC, would lead to a generation of around 10,000 jobs in the project, which will be spread over 157-acre land in Palghar district. Captain Amol Yadav was a senior commander with Jet Airways.

(The above story first appeared on LatestLY on Aug 15, 2020 07:20 PM IST. For more news and updates on politics, world, sports, entertainment and lifestyle, log on to our website latestly.com).