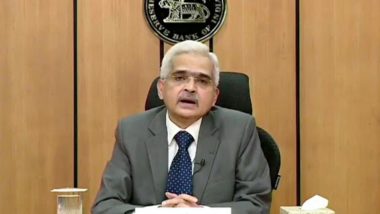 New Delhi, August 16: The coronavirus pandemic has affected economies of several countries. The GDP of several nations, including India, is in the doldrums. On Wednesday, addressing a media conference, Shaktikanta Das, RBI governor said that the global economy is estimated to have suffered the sharpest contraction in living memory in April-June 2020 on a seasonally adjusted quarter on quarter basis.

"The world merchandised trade estimated to have registered steep year on year decline of over 18 percent in the second quarter of the 2020 calendar year, said Das. He further mentioned that the high-frequency indicators point to a trough in global economic activity in April to June quarter and subsequent recovery is underway in several economies such as USA, UK, Euro area and Russia. India's COVID-19 Tally Crosses 50 Lakh-Mark After 90,123 People Test Positive For Coronavirus in A Day; Death Toll Mounts to 82,066.

Global Economy Estimated to Have Suffered Sharpest Contraction in April-June 2020:

Global economy estimated to have suffered sharpest contraction in living memory in April-June 2020 on seasonally adjusted quarter on quarter basis. World merchandised trade estimated to have registered steep yr on yr decline of over 18% in 2nd quarter of 2020 calendar yr: RBI Gov pic.twitter.com/2vkgNyZHjv

Elaborating on recovery from this fall, Das mentioned that the economy is showing signs of recovery, but it is not yet fully entrenched. "In some sectors, the optic noticed in June & July appears to have levelled off. By all indications, the recovery is likely to be gradual as efforts towards reopening of the economy are confronted with rising infections," added Das.

COVID-19 tally in India on Wednesday crossed the 50-lakh mark after 90,123 people test positive in a day. The death toll, on the other hand, has increased to 82,066. The country has climbed to the second spot among the worst-hit nations in the coronavirus pandemic. It ranks right after United States, which leads the tally.

(The above story first appeared on LatestLY on Sep 16, 2020 01:03 PM IST. For more news and updates on politics, world, sports, entertainment and lifestyle, log on to our website latestly.com).