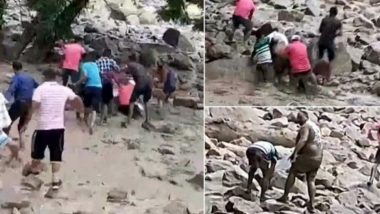 Uttarakhand, July 31: Congress MLA Harish Dhami had a narrow escape after he slipped while crossing a flooded rivulet in Dharchula area of Pithoragarh on Thursday. He was rescued by party workers and supporters accompanying him.

The water was filled with debris, due to which the MLA from Dharchula received minor injuries. Those accompanying him managed to get him out of the flowing rivulet. Dhami had gone to Lumti and Mori village affected by heavy rainfall. Uttarakhand: Pithoragarh's Villagers Carry Patient to Hospital on Makeshift Stretcher After Landslide and Rainfall, Video Goes Viral.

Harish Dhami Has a Narrow Escape After He Slips While Crossing Flooded Rivulet in Pithoragarh:

#WATCH Uttarakhand: Congress MLA Harish Dhami had a narrow escape after he slipped while crossing a flooded rivulet in Dharchula area of Pithoragarh. He was rescued by party workers & supporters accompanying him. (30.07.2020) pic.twitter.com/9pZDHSd30T

Due to heavy rainfall in some areas of the state, the water level has risen and connectivity to many villages has been affected. In hilly areas, the mountain rivulets are flowing with more water along with muck and debris like rocks and branches of trees, making it extremely dangerous for people to cross.

(The above story first appeared on LatestLY on Jul 31, 2020 08:39 AM IST. For more news and updates on politics, world, sports, entertainment and lifestyle, log on to our website latestly.com).