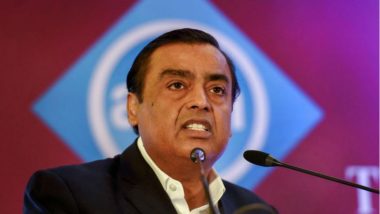 Mumbai, February 24: Reliance Industries Chairman Mukesh Ambani said on Monday that India is set to rank among top three economies in the world and technology will play a big role in that journey."There is no doubt in anyone's mind (on India becoming the third-largest economy). We may argue if it will happen in five or 10 years," he said in a conversation with Microsoft Chief Executive Officer Satya Nadella in Mumbai.

Ambani said India's journey from a 300 billion dollar economy in 1992 to three trillion dollars was due to the rise of tech companies. The new wave, however, will be driven by large-scale tech adoption within the country, he said."While TCS and Infosys kickstarted this, it was supercharged when Prime Minister Narendra Modi gave the vision of Digital India. Now we have the infrastructure and we are accelerating," he said.

Meanwhile, Nadella urged Indian business leaders to build technology capabilities that are inclusive in nature. "Indian CEOs need to build own tech capability and ensure that the solutions are inclusive," he said. Nadella said the emergence of aggregators in the past decade is not enough. "We need to ensure that digital interventions lead to broadening of productivity," he said.