Prithvi Short-Range Ballistic Missile Developed by DRDO Successfully Test-Fired From Balasore in Odisha; All You Need to Know 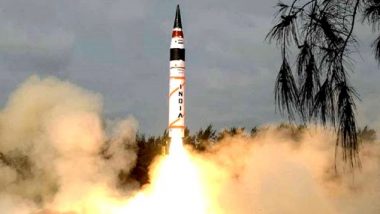 Bhubaneswar, September 24: India on Wednesday successfully test-fired the indigenously developed Prithvi short-range ballistic missile from Odisha. The ballistic missile has been developed by the Defence Research and Development Organisation (DRDO). It was test-fired from the Interim Test Range, Balasore off the coast of Odisha. The missile achieved its all mission objective as decided by Strategic Forces Command. "The missile trajectory was tracked by radars, electro-optical tracking systems and telemetry stations by the DRDO along the coast of Odisha," a DRDO official was quoted by PTI.

This is the third such trial conducted by DRDO within a week. It had successfully carried out testfire of a laser guided Anti Tank Guided Missile (ATGM) from the main battle tank (MBT) Arjun and the successful flight test of ABHYAS - High Speed Expandable Aerial Target from ITR Balasore on Tuesday. Laser-Guided Anti Tank Guided Missile Successfully Test-Fired by DRDO From MBT Arjun Tank in Ahmednagar; All You Need to Know About the ATGM.

Prithvi Short-Range Ballistic Missile test-fired From Odisha: All You Need to Know

The last night time testfire of Prithvi-II was conducted successfully from the ITR on November 20, 2019. The nine-metre long ''Prithvi'', which has already been inducted into the armoury of the defence forces in 2003, was the first missile to have been developed by DRDO under the Integrated Guided Missile Development Programme (IGMDP).

(The above story first appeared on LatestLY on Sep 24, 2020 09:26 AM IST. For more news and updates on politics, world, sports, entertainment and lifestyle, log on to our website latestly.com).