Consisting of two cabins with each having a capacity of 32 passengers at a time, the ropeway, however, given the Covid-19 protocol, will for the time being only carry 15 people, said the Guwahati Metropolitan Development Authority (GMDA), which executed the project. 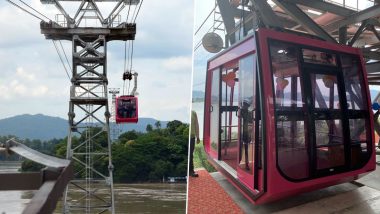 Guwahati, August 24: India's longest river ropeway of 1.82km connecting Guwahati and North Guwahati over the Brahmaputra river in Assam was inaugurated on Monday. It is expected to boost tourism in the region.

The ropeway will cross the Urvashi island and the commuters will catch a glimpse of the Umananda Temple on Peacock Island, built by Ahom King Gadadhar Singha. Launching the ropeway service, Assam Health, Finance and Education Minister Himanta Biswa Sarma said that generally ropeway is built in the mountainous areas, but the Guwahati ropeway is the first ropeway in India over a river built at a cost of Rs 56.8 crore. World's Highest Railway Arch Bridge in Jammu and Kashmir's Reasi District to Be Completed by 2021.

The ropeway would cover the distance now in 8-9 minutes, which earlier used to take more than an hour, and further increased during the floods.

Consisting of two cabins with each having a capacity of 32 passengers at a time, the ropeway, however, given the Covid-19 protocol, will for the time being only carry 15 people, said the Guwahati Metropolitan Development Authority (GMDA), which executed the project.

The works for the ropeway project started in 2006 but was virtually abandoned after 2011. The service would benefit people, especially those living in northern regions of Guwahati, Assam's and northeast India's main commercial hub.

"People living in northern vicinity of Guwahati suffer a lot during the monsoon flood when the ferry services remain suspended on the Brahmaputra. Travel by road to reach main city of Guwahati takes up too much time and cost during the flood," Sarma said.

He said: "We had started the ropeway project in 2006 aiming to complete it by 2011. Some technical issues cropped up then. The Archaeological Survey of India had pointed out to introduce some new rules vis-A-vis ropeway construction. After necessary clearance, the work resumed. It had even reached the Gauhati High Court.

"We resumed the work when I got the responsibility of GMDA in 2016 after becoming minister in the BJP led ministry."

GMDA officials said that the ropeway has been built as per state of art technology following relevant Indian and international standards. "The ropeway is a convenient and non-polluting means of transport, as well as a source of environmentally friendly tourism.

"It is ecologically sustainable as it is run by electric power protecting the beauty of the area, while simultaneously providing passengers with a comfortable and speedy means of travel," an official statement said.

(The above story first appeared on LatestLY on Aug 24, 2020 09:16 PM IST. For more news and updates on politics, world, sports, entertainment and lifestyle, log on to our website latestly.com).