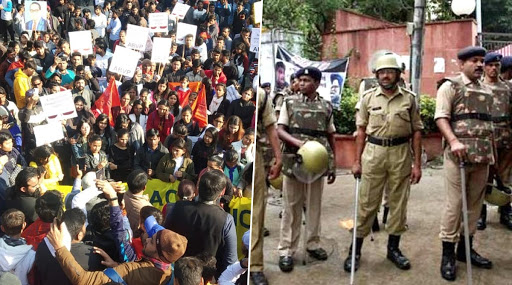 New Delhi, January 14: The Delhi Police on Tuesday registered FIR against nine accused in the December 15 violence in the Jamia Millia Islamia University. The police have till now identified nine accused for violence during the anti CAA protests and have questioned three people. All the development took place after JMI VC Nazma Akhtar met the senior officers of Delhi Police.

According to the inputs, the Delhi Police have began the probe and have questioned three suspects for arsons and violence of last month. The Police also mentioned that they will question others too in the case. Jamia Millia Islamia Postpones Semester Exams Until Further Notice, Says Concerns of Agitating Students Heard by VC Najma Akhtar.

Also, a four member team of National Human Rights Commission (NHRC) visited the Jamia Millia Islamia to record statements of 35-40 students, who were allegedly injured during the police action on the campus in December 15. The team has decided to further probe the case till January 17.

All the development took place a day after the students protested outside JMI VC's office after which Akhtar met with them. The students were demanding rescheduling of exam dates, registration of FIR against Police and ensuring safety to students. To this, Akhtar sought some time from the students. It is to be known that on December 15, Delhi Police intruded into the campus and allegedly assaulted students after protests against the Citizenship Amendment Act had turned violent.