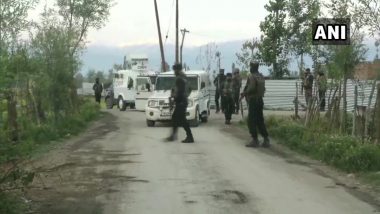 New Delhi, December 1: A total of 165 terrorists have been killed while 14 have been apprehended by security forces in Jammu and Kashmir this year, the Parliament was informed on Wednesday.

Minister of State for Home Nityanand Rai told the Rajya Sabha, in a written reply, that there has been a substantial decrease in incidents of infiltration and terrorist attacks in the Union Territory since 2018.

The minister also said that during this period (from October 2020 to October 2021, a total of 32 security forces personnel and 19 from Jammu and Kashmir Police were martyred.

The house was also told that in October 2021, around 115 Kashmiri Pandit families living in Kashmir moved to Jammu. These families are of the government employees, many of whom moved to Jammu in winter as part of movement of officials and winter vacation in educational institutions.

(The above story first appeared on LatestLY on Dec 01, 2021 11:06 PM IST. For more news and updates on politics, world, sports, entertainment and lifestyle, log on to our website latestly.com).