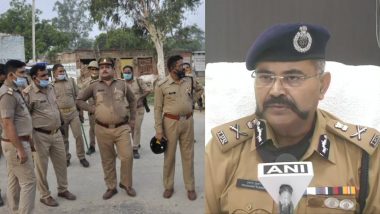 Lucknow, July 7: Uttar Pradesh Additional Director General of Police (Law and Order) Prashant Kumar on Tuesday informed that all the injured policemen in Kanpur encounter are out of danger. Kumar also said that police's 40 teams and STF are working together to nab the gangster Vikay Dubey. He assured the people that Dubey will soon be arrested.

Until and unless we arrest Vikas Dubey and his accomplices, we will not sit quietly: UP's ADG (law and order) Prashant Kumar #KanpurEncounter https://t.co/NtqfM5pYow

Apart from this, Kumar said that 40 police teams and STF are working to nab the dreaded gangster Vikas Dubey. The senior police personal added that information is being collected on Dubey's accomplices and members of the family. Also, pieces of information from where the gangster collected the weapons are being collected.

(The above story first appeared on LatestLY on Jul 07, 2020 04:10 PM IST. For more news and updates on politics, world, sports, entertainment and lifestyle, log on to our website latestly.com).