Police have arrested a man in Madhya Pradesh for allegedly making objectionable remarks on Facebook over the death of Chief of Defence Staff (CDS) General Bipin Rawat and others in a helicopter crash near Coonoor in Tamil Nadu, an official said. 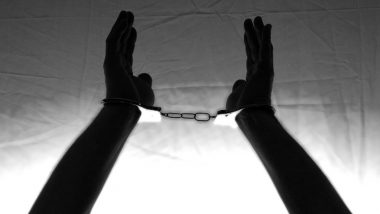 Khandwa, Dec 11: Police have arrested a man in Madhya Pradesh for allegedly making objectionable remarks on Facebook over the death of Chief of Defence Staff (CDS) General Bipin Rawat and others in a helicopter crash near Coonoor in Tamil Nadu, an official said.

General Rawat, his wife Madhulika and 11 others on board an Indian Air Force helicopter died in the crash on Wednesday.

"A comment was made on social media on Thursday and we received a complaint in this regard, following which the person who had passed the remark was booked and arrested on Friday," Khandwa's Superintendent of Police Vivek Singh told reporters. Indian Air Force Mi-17V5 Helicopter with CDS Gen Bipin Rawat on Board Crashes in Tamil Nadu.

Pandhana police station in-charge R S Malviya said the complainants also furnished a video CD in support of their allegation, after which the accused, identified as Durgesh Vaskele, was arrested.

He was booked under the Indian Penal Code (IPC) sections 297 (trespass to wound religious feelings), 153A (enmity between different groups), 153B (imputations, assertions prejudicial to national-integration), among others, Malviya said.

In his Facebook post, Vaskele wrote - "You have killed our 14 people, in return nature swallowed your 13 soldiers", the FIR said.

In the post, he was apparently referring to the death of 14 civilians in Nagaland in firing by security forces.

The complainants - Ajay More and Neelesh Dangore - alleged that Vaskele expressed happiness over the martyrdom of the soldiers and CDS Bipin Rawat and his wife Madhulika Singh, and tried to disturb the social harmony.

The accused insulted the martyrs and his act adversely affects the national unity and integrity, they said.

State Congress spokesman Narendra Saluja asked why no action was taken against Patel.

"Pandhana police registered a case against a person for an objectionable post about the helicopter crash, but no action was taken against the district head of BJP IT cell, who made objectionable remarks by writing 'Absolutely true' in response to the post," he said.

BJP MLA Dangore said he has learnt about Patel's comment and has apprised the party's senior leadership in this regard.