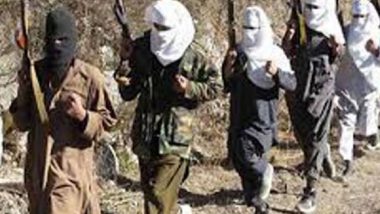 Pakistan Prime Minister Imran Khan addressed a joint session of the National Assembly where he said that the revocation of the special status for Jammu and Kashmir would result in another Pulwama-like attack, which can lead to a war between India and Pakistan. Khan also discussed Pakistan's future course of action in the wake of India's move. Article 370 Abrogation From Jammu And Kashmir: UAE Backs Narendra Modi Government's Decision, Calls It India's 'Internal Matter'.

According to a report published in Hindustan Times, the time Khan made the statement, news also surfaced that Rauf Azghar, the younger brother of Jaish chief Maulana Masood Azahar had moved up to Pakistan-occupied Kashmir (PoK). A large number of terrorists have also reportedly moved to the PoK. Farooq Abdullah Threatens to Move Court Against Scrapping of Article 370, Says 'I Have Been Put Under House Arrest'; Amit Shah Rebuts Claim.

On Monday, India scrapped the provision of Article 370, which gave status to Jammu and Kashmir. The Modi government also bifurcated the state into two union territories – Jammu and Kashmir and Ladakh. Jammu and Kashmir will have a legislative assembly, while there will be no legislature in Ladakh. Meanwhile, internet facilities in the valley have been suspended since Monday. Top political leaders of Jammu and Kashmir including Omar Abdullah and Mehbooba Mufti were also detained.

(The above story first appeared on LatestLY on Aug 07, 2019 07:48 PM IST. For more news and updates on politics, world, sports, entertainment and lifestyle, log on to our website latestly.com).