Mumbai Shocker: Father Dies of Shock After Learning About Son's Death During Garba Event in Virar

The incident happened late on Saturday night when Manish Narpat Sonigra was playing garba at the Global City housing complex in Evershine Nagar and suddenly crashed on the ground. 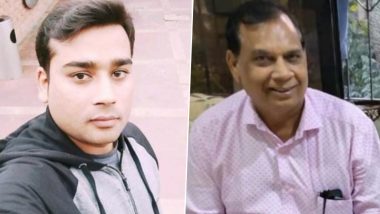 The police have lodged an accidental death report case in the matter. (Photo credits: IANS Twitter)

Palghar, Oct 3: In a double tragedy on Navratri, a 35-year-old man collapsed and died while playing 'garba' at a marquee in Virar town here, and upon hearing of the incident, his father also died due to the shock, officials said.

He was rushed to a nearby hospital but declared dead on arrival late that night, said a relative.

Upon learning this, his stunned father Narpat Harakchand Sonigra, 66, also collapsed the breathed his last, plunging the entire locality into gloom.

The funeral rites of the deceased father-son duo were performed in Virar town on Sunday evening, while the police have lodged an accidental death report case in the matter.

(The above story first appeared on LatestLY on Oct 03, 2022 03:18 PM IST. For more news and updates on politics, world, sports, entertainment and lifestyle, log on to our website latestly.com).