The incident was reported from Nagpur region of Maharashtra on Saturday. Following the incident, the man surrendered to the cops. According to the cops, the ‘bomb’ he assembled from scrap bits and pieces had no chance of going off. 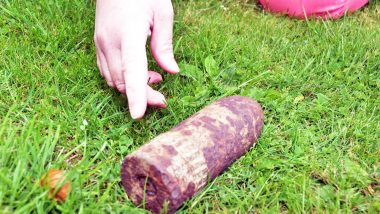 Nagpur, June 14: In a bizarre incident, a man in Maharashtra allegedly made a bomb by looking at YouTube videos but was scared thinking that it might explode. Reports inform that the man performed this stunt to make his presence felt in society and to garner attention from people. According to a report by TOI, the man, identified as 25-year-old Rahul Pagare, made a bomb by watching several videos on YouTube. After making the bomb, the man was afraid of the consequences and took it to the police station.

The incident was reported from Nagpur in Maharashtra on Saturday. Following the incident, the man surrendered to the cops. According to the cops, the ‘bomb’ he assembled from scrap bits and pieces had no chance of going off. The man, who is now in the custody of Nandanvan police in Nagpur, had learned to make a bomb by watching YouTube videos. Fearing that the bomb may explode, he went into the Nandanvan police station with the bomb in a bag, triggering fear and chaos. Saudi Arabia: Bomb-Laden Drone Falls on School in Border City of Asir.

The cops then alerted Bomb Detection and Disposal Squad (BDDS), which dismantled the device brought in by Pagare. A senior Police officer said that the bomb wouldn't have exploded or caused any damage and the man had filled a plastic box with some gunpowder used for making crackers.

When questioned by the cops, Pagare said he found a bomb at a desolate place near his house and had come to hand it to the Police. The cops got suspicious about his statement. However, Pagare soon spilled the beans and confessed to making the bomb and lied fearing that he would get caught.

The cops said that Pagare had been staying alone at rented places after losing both parents. Pagare, who worked at a saloon, had to shift frequently since he was not able to pay rent. Pagare was remanded to police custody for two days by the court.

(The above story first appeared on LatestLY on Jun 14, 2021 03:10 PM IST. For more news and updates on politics, world, sports, entertainment and lifestyle, log on to our website latestly.com).