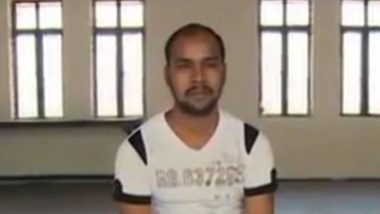 On January 7, a Delhi court issued a death warrant for the four convicts. Subsequently, two convicts, Mukesh and Vinay Sharma, filed the curative petitions before the Supreme Court. A five-judge bench of Justices NV Ramana, Arun Mishra, RF Nariman, R. Banumathi and Ashok Bhushan dismissed their pleas and unanimously held that there was no merit in the curative petitions of the convicts, who sought reconsideration of the death penalty. Tihar Jail Authorities Shift All Four Convicts to Prison 3 Near Hanging Courtyard.

On January 14, Mukesh moved the Delhi High Court challenging the death warrant issued against him. However, the Delhi High Court refused to interfere. Mukesh then moved the Patiala House Court, appraising the court regarding the pendency of the mercy petition before the President and seeking postponement of the execution date. According to the death warrant, Singh and other three convicts are scheduled to be hanged on January 22.

On January 16, Additional Sessions Judge Satish Kumar Arora asked the jail authorities to submit a report under Section 840 of the Delhi Prison Rules stating the action taken regarding the mercy petition of convict Mukesh and regarding the postponement of the date of execution.

The 23-year-old victim in the 'Nirbhaya' case was brutally gangraped and tortured on December 16, 2012, which later led to her death. All the six accused were arrested and charged with sexual assault and murder. One of the accused was a minor and appeared before a juvenile justice court, while another accused committed suicide in Tihar Jail.

Four of the convicts were sentenced to death by a trial court in September 2013, and the verdict was confirmed by the Delhi High Court in March 2014 and upheld by the Supreme Court in May 2017 which also dismissed their review petitions.

(The above story first appeared on LatestLY on Jan 17, 2020 12:20 PM IST. For more news and updates on politics, world, sports, entertainment and lifestyle, log on to our website latestly.com).