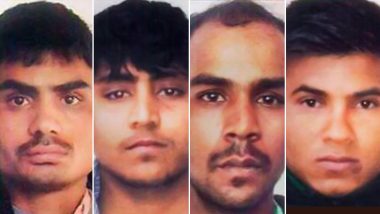 New Delhi, January 23: All four convicts in the Nirbhaya gangrape and murder case - Akshay Singh, Pawan Gupta, Mukesh Singh and Vinay Sharma - will be hanged till death on February 1. Even though only a few days are left before their execution, the convicts have so far not made any last wishes, according to a report. Before hanging, death row convicts are asked if they want to meet any family member and leave a will for their properties. Nirbhaya Convicts Hanging: Tihar Jail in Delhi Performs Dummy Execution, Noose Tested With Stone-Filled Sacks.

According to sources at the Tihar jail, all four convicts in the Nirbhaya gangrape and murder case have so far remained silent when asked about meeting their family for the last time or willing their property, NDTV reported. It suggests they are still hopeful that the hanging would be delayed. While Mukesh has exhausted his legal recourse of curative petition, a mercy petition moved in Vinay's name and his letter disowning the plea are pending before President Ram Nath Kovind.

Pawan and Akshay have not yet filed a curative petition. The hanging of all four convicts could be delayed if Pawan and Akshay file a curative petition. In 1982, the Supreme Court in Harbansh Singh vs State of Uttar Pradesh case had decided that death row convicts involved in one incident of crime could not be hanged separately, India Today reported.

On Wednesday, the government moved the Supreme Court seeking modification of its January 2014 judgement that didn't specify a deadline for availing legal remedies by death row convicts. Convicts, in heinous crimes, under the garb of Article 21 were taking the judicial process for a ride, the Ministry of Home Affairs (MHA) said.

(The above story first appeared on LatestLY on Jan 23, 2020 12:29 PM IST. For more news and updates on politics, world, sports, entertainment and lifestyle, log on to our website latestly.com).