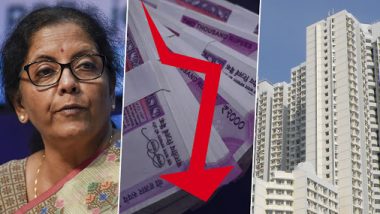 According to the new measures taken by the Union Finance Ministry, a special window has been opened for affordable and middle housing which would enable to revive stalled housing projects. The Rs 10,000 crore would be contributed by the Union government, while the same amount would be opened for outside investors.

In this esteemed scheme of the government, the single window would act as last-mile funding for housing projects which are non-NPA (Non-Performing Asset) and non-National Company Law Tribunal (NCLT) and would be linked with 10-year G-Sec yields. The interest rates on House Building Advance will be lowered to encourage government servants to buy new houses. Finance Minister Nirmala Sitharaman Announces New Measures to Boost Exports

Apart from this, Sitharaman stated that External Commercial Borrowing (ECBs) -- loans in India made by non-resident lenders in foreign currency to Indian borrowers -- would also be relaxed to facilitate the financing of home buyers who are eligible under Pradhan Mantri Awas Yojana (PMAY). This would be done in consultation with the Reserve Bank of India, which would decide the rate of interest on it. Growth of 8 Core Sectors Recedes to 2.1% in July Vis-a-Vis 7.3% Last Year.

Among another slew of measures, the government announced revised Priority Sector Lending (PSL) norms for Export Credit and stated that it would release an additional Rs 36,000 crore to Rs 68,000 crore as export credit under priority sector. She mentioned that all efforts are being made aiming to revive the Gross Domestic Product (GDP) rate in the next quarter of current FY 19-20.

(The above story first appeared on LatestLY on Sep 14, 2019 05:01 PM IST. For more news and updates on politics, world, sports, entertainment and lifestyle, log on to our website latestly.com).