Plastic Ban in India: About 200 Brands Register for Extended Producer Responsibility for Packaging Ahead of Single Use Plastic Ban

As per the data from Central Pollution Control Board (CPCB), for year 2022-23, as many as 198 brand owners (BOs), and 26 importers (Is) have registered under the PIBO registration; the process is ongoing for 26 BOs, 29 producers (Ps) and 48 Is, while 76 BOs, 17 Ps and 38 Is have submitted their applications for registration. 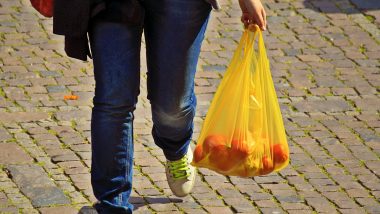 New Delhi, June 28: Ahead of the total ban on Single-Use Plastic (SUP) from July 1, about 200-odd brand owners, including several MNCs, and 26 importers of plastic have registered for the Extended Producer Responsibility (EPR) for plastic packaging under the amended Plastic Waste Management Rules 2016.

As per the data from Central Pollution Control Board (CPCB), for year 2022-23, as many as 198 brand owners (BOs), and 26 importers (Is) have registered under the PIBO registration; the process is ongoing for 26 BOs, 29 producers (Ps) and 48 Is, while 76 BOs, 17 Ps and 38 Is have submitted their applications for registration.

"Applications of 49 brand owners and 59 importers were rejected for multiple reasons," said a senior official from the CPCB, adding, "The process is on-going and we are reaching out to the industry constantly. There are laggards and there are willing companies." Not all companies use SUP for plastic packaging but the registration has been made compulsory for long term plastic management under the new Rules. Plastic Ban in India: Why Is Single-Use Plastic Being Banned in the Country? Know List of Items To Be Prohibited From July 1; Here's All You Need To Know.

The EPR, i.e. the Extended Producer Responsibility, means the responsibility of a producer for the environmentally sound management of the product until the end of its life. The Ministry of Environment, Forest and Climate Change(MoEF&CC) had notified the EPR guidelines vide Fourth Amendment to Plastic Waste Management Rules 2016 on February 16.

After Prime Minister Narendra Modi announced freedom for India from SUP in his 2019 Independence Day speech, the MoEF&CC had brought in an amendment to the Plastic Waste Management (PWB) Rules in August 2021 that prohibited manufacture, import, stocking, distribution, sale & use of SUP from July 1, 2022.

These items include plastic sticks that are used in ear buds, balloons, candy, ice-cream; cutlery items such as plates, cups , glasses, forks, spoons, knives, trays; packaging / wrapping films such as that used for sweet box, invitation cards, cigarette packets, and other items such as plastic flags, PVC banners of less than 100 microns, polystyrene for decoration.

The minimum specified thickness for polythene carry bags was 75 micron already applicable from September 2021 but it would be 120 microns from December 2022. Plastic Ban: BIS Issues Standards for Alternative Products Due to Single Use Plastic Ban.

The CPCB has no actual data for the average plastic waste generation in cities and considers it to be around 6.92 per cent of the municipal solid waste (MSW) as per the 2015 report 'Assessment & Characteristics of Plastic Waste generated in 60 cities'.

(The above story first appeared on LatestLY on Jun 28, 2022 09:39 AM IST. For more news and updates on politics, world, sports, entertainment and lifestyle, log on to our website latestly.com).