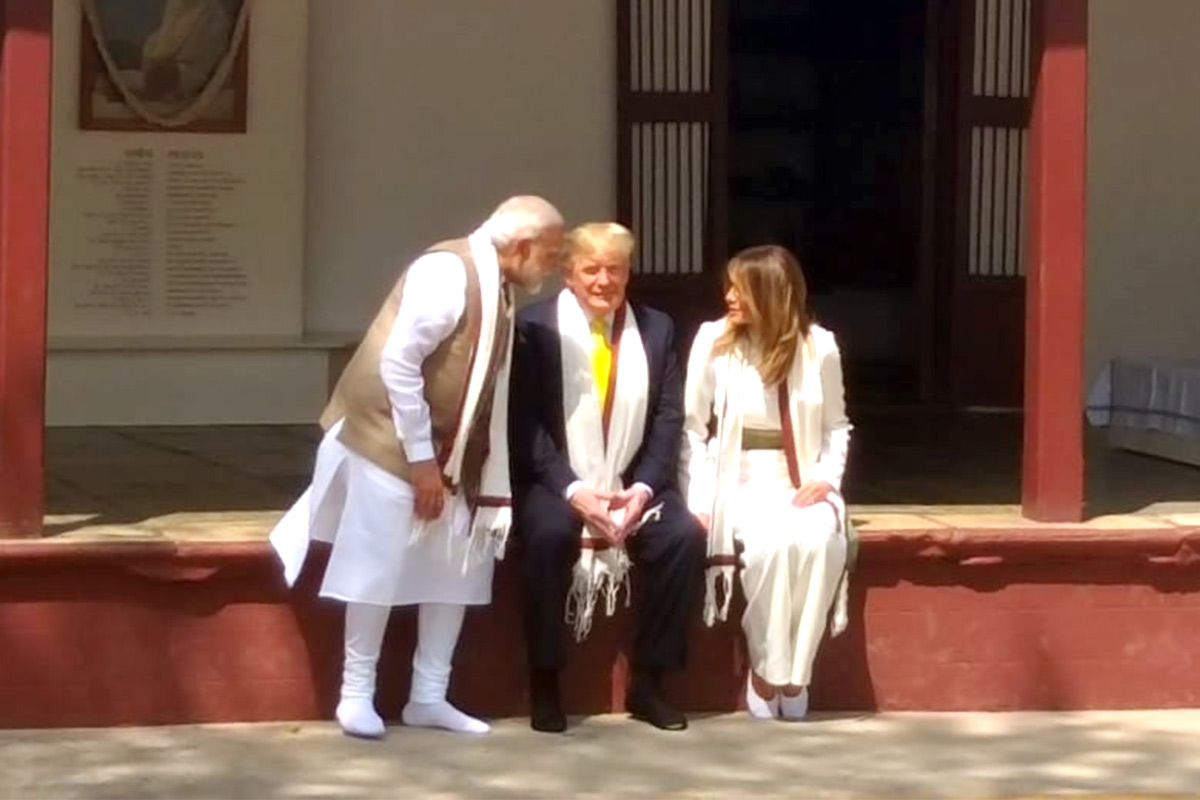 New Delhi, February 24: US President Donald Trump and Prime Minister Narendra Modi will aim to expand India-US global partnership in their extensive talks on Tuesday, a day after both lavished praise on each other and vowed to script a better future for people of the two democracies.

In an address at a massive "Namaste Trump" rally at Motera stadium in Ahmedabad, the US president announced that deals to sell state-of-the-art military helicopters and other equipment worth over USD 3 billion will be sealed on Tuesday.  Donald Trump, US First Lady Melania Trump Visit Taj Mahal in Agra; See Pics and Video.

Trump, accompanied by his wife Melania, daughter Ivanka, son-in-law Jared Kushner and top brass of his administration, arrived in Ahmedabad around noon on Monday for a nearly 36-hour-long maiden visit to India. The US president was feted at the world's largest cricket stadium in the Namaste Trump event and was cheered by tens of thousands of people as Prime Minister Narendra Modi invited him to address them.

"We love you. We love you, India, very much," Trump said finishing his 27-minute speech in which he heaped praise on Modi and spoke highly about India's achievements in diverse areas.

Talking about defence and strategic ties between the two countries, Trump said the US is looking forward to providing India with some of the best and most feared military equipment on the planet.

"We make the greatest weapons ever made: airplanes, missiles, rockets, ships. We make the best. And we're dealing now with India. But this includes advanced air defence systems and armed and unarmed aerial vehicles," Trump said.

The deals mentioned by Trump will include procurement of 24 MH-60 Romeo helicopters by India from the US at a cost of USD 2.6 billion. Another contract to acquire six AH-64E Apache helicopters for USD 800 million from the US is also on the table.

"I am pleased to announce that tomorrow our representatives will sign deals to sell over USD 3 billion in the absolute finest, state-of-the-art military helicopters and other equipment to the Indian armed forces," Trump said.

Tuesday's talks between Modi and Trump are likely to send across a clear message of growing congruence of interests between India and the US on major geopolitical developments in the region and beyond, particularly when China has been expanding its military and economic clout.

However, the talks between the two leaders are unlikely to produce tangible outcome in resolving thorny issues like trade tariffs. In their talks, Trump and Prime Minister Narendra Modi are likely to focus on a wide variety of bilateral and regional issues including trade and investment, defence and security, counter-terrorism, H1B, energy security, religious freedom, proposed peace deal with Taliban in Afghanistan and situation in the Indo-Pacific, according to Indian and US officials.

About economic ties, Trump said, "Over the course of my visit, Prime Minister Modi and I will also discuss our efforts to expand the economic ties between our two countries."

"We will be making very, very major -- among the biggest ever made -- trade deals. We are in the early stages of discussion for an incredible trade agreement to reduce barriers of investment between the United States and India.

"I am optimistic that, working together, the Prime Minister and I can reach a fantastic deal that's good and even great for both of our countries," said Trump at the event in Motera stadium.

Last week, Kumar said India does not want to create "artificial deadlines". The US has been seeking greater access to India's huge poultry and dairy markets. However, India has some reservations over it. In his address, Trump said Modi is a tremendously successful leader of the vast Indian Republic.

"Last year, more than 600 million people went to the polls and gave him a landslide victory like no other in the largest democratic election ever held anywhere on the face of the Earth," said Trump. In his speech, Modi also complimented Trump.

From Ahmedabad, the US president travelled to Agra to have a glimpse of the iconic Taj Mahal. The Trump family spent about an hour at the Taj Mahal before sunset. They arrived in Delhi from Agra at around 7:30 PM. On the morning of February 25, Trump and the First Lady would be accorded a ceremonial welcome at the forecourt of the Rashtrapati Bhavan.

From there, they would go to Rajghat to pay homage at the 'samadhi' of Mahatma Gandhi. It would be followed by restricted and delegation-level talks between Trump and Modi at Hyderabad House. Prime Minister Modi would host a lunch for the US president following the talks.

In the afternoon, Trump is expected to attend certain private events at the US Embassy, including a roundtable with industry representatives. In the evening, the US president will meet President Ram Nath Kovind at the Rashtrapati Bhavan. A banquet will be hosted by Kovind. President Trump would depart from India later on Tuesday evening.