Prime Minister Narendra Modi on Saturday exhorted new police rookies, saying: "I am confident the young IPS probationers will work beyond the police stations and HQ. They will work among the people and do their best to address their problems." 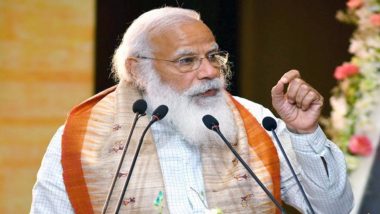 New Delhi, July 31: Prime Minister Narendra Modi on Saturday exhorted new police rookies, saying: "I am confident the young IPS probationers will work beyond the police stations and HQ. They will work among the people and do their best to address their problems." Emphasizing on the need to keep police ready round the clock especially in times of technological disruptions, Modi addressing the IPS probationers said that the challenge was to prevent new types of crime with even more innovative methods.

Speaking on the occasion, the Prime Minister noted that coming August 15 will herald 75th anniversary of Independence. Last 75 years have seen efforts to build a better Police Service. In recent years, significant improvement has taken place in the infrastructure related to police training.

The Prime Minister exhorted the officer trainees to remember the spirit of the freedom struggle. He said the period between 1930 to 1947 saw the younger generation of our country rise in unison to achieve a great goal. He said that same feeling is expected in the youth of today, "They fought for 'Swarajya'; you have to move forward for 'Surajya'," he said.

He asked the officer trainees to remember the significance of the time they were entering into their career when "India is undergoing transformation at every level. As their first 25 years in the service are going to be critical 25 years in the life of the country when Indian republic will move from 75 years of independence to the centenary year of its independence".

Modi told the probationers that people expect a certain degree of conduct from them. He asked them to be always mindful of the dignity of their service not only in office or headquarters but beyond that too.

"You will have to be aware of all the roles in the society, you'll need to remain friendly and keep the honour of the uniform supreme," said the Prime Minister. He reminded the officer trainees that they are the flag-bearers of 'Ek Bharat-Shreshth Bharat', therefore they should always keep the mantra of 'Nation First, Always First' foremost in their mind and it should reflect in all their activities.

In their decisions art field level they should keep national interest and national perspective in mind, said the Prime Minister. He acknowledged the bright young women officers of the new generation and said that there have been efforts to increase the participation of women in the force.

He expressed hope "our daughters will infuse the police service with the highest standards of efficiency, accountability and will also bring in elements of politeness, ease and sensitivity". He also mentioned that the states are working on introducing Commissioner System in the cities with more that 10 lakh population.

The system has already been introduced in many cities of 16 states. He said it is important to work collectively and sensitively to make policing effective and futuristic.

The Prime Minister paid homage to the members of the police force who lost their life while serving during the pandemic. He recalled their contribution in the fight against the pandemic. He said that police officers from neighbouring countries, undergoing training at the academy underline the closeness and deep relation of the countries.

He said that whether it is Bhutan, Nepal, Maldives or Mauritius, we are not just neighbours but we also share lot of similarities in our thinking and social fabric. "We are friends in times of need and whenever there is any calamity or difficulty we are the first responders for each other. This was evident during the Covid period also," he said.

(The above story first appeared on LatestLY on Jul 31, 2021 05:42 PM IST. For more news and updates on politics, world, sports, entertainment and lifestyle, log on to our website latestly.com).