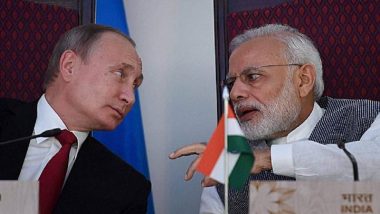 New Delhi, July 2: Prime Minister Narendra Modi and Russian President Vladimir Putin, in a telephonic conversation on Thursday, stressed on deepening their bilateral ties to jointly address the post COVID-19 challenges. The phone call from Modi to Putin comes ahead of the latter's likely victory in a constitutional amendment poll which will allow him to remain in power till 2036. India's Candidacy For UNSC Permanent Seat Supported by Us, Says Russian Foreign Minister Sergei Lavrov.

A statement issued by the Indian government claimed that Modi had dialled the Russian President to commemorate the 75th anniversary of World War 2, which had witnessed the Red Army of erstwhile Soviet Union playing an incremental role in the defeat of Nazi Germany.

"PM Modi spoke on phone with Russian President Vladimir Putin today and congratulated him on the success of the 75th anniversary celebrations of the victory in the Second World War, and also for successful completion of the vote on constitutional amendments in Russia," said a statement issued by the Prime Minister's Office (PMO).

"Modi and Putin took note of effective measures undertaken by the two countries to address the negative consequences of COVID-19 and agreed on the importance of closer India-Russia ties for jointly addressing the challenges of the post-COVID19 world," the Indian government said.

Russian President Putin thanked Prime Minister Narendra Modi for the phone call and reiterated his commitment to further strengthen the Special and Privileged Strategic Partnership between the two countries in all spheres.

Modi and Putin agreed to maintain the momentum of bilateral contact and consultations, leading to annual bilateral Summit to be held in India later this year, the statement said. PM Modi conveyed his keenness to welcome President Putin in India for the bilateral summit.

Notably, Russia and India are among the worst-hit nations of the world due to the coronavirus crisis. Russia, with more than 6.5 lakh cases, is the second-worst affected nation followed by India with 6.04 lakh cases. The Union States remains the most severely hit country in the world with the overall caseload crossing 2.7 million.

(The above story first appeared on LatestLY on Jul 02, 2020 03:40 PM IST. For more news and updates on politics, world, sports, entertainment and lifestyle, log on to our website latestly.com).