During the year-long celebration that started last year, the BJP government held a series of exhibitions, seminars and cultural events to showcase work of the Goa government, its identity and struggle. 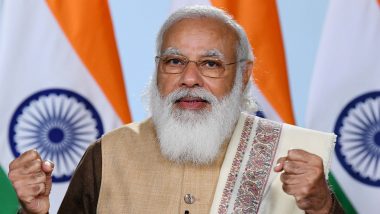 New Delhi, November 20: Prime Minister Narendra Modi will attend the Goa Liberation Day programme to mark 60 years of the state's freedom from Portuguese rule on December 19 in the state capital Panaji. The coastal state was liberated from 451 years of colonial Portuguese rule on December 19, 1961 and with an eye on next year assembly elections, the BJP government has planned a grand celebration aGoa@60', party sources said.

The sources told IANS that the Prime Minister is all set to attend the main grand event on December 19. "Details of his itinerary will be finalised in the coming days. Modi will participate and address the main event," they said. According to a senior BJP leader, the celebrations is not only about celebrating events, but about celebrating developments too, especially in the state's rural areas. "The Prime Minister attending the celebrations will be one of his pre-election visits and few more may follow before the announcement of election dates," he said.  PM Narendra Modi To Inaugurate 341-KM Long Purvanchal Expressway Connecting Lucknow With Ghazipur Today.

During the year-long celebration that started last year, the BJP government held a series of exhibitions, seminars and cultural events to showcase work of the Goa government, its identity and struggle. "Our government uses the celebration as an opportunity to strike a connection with the people ahead of the next year's Assembly election," a BJP leader said.  PM Narendra Modi Address to The Nation Highlights: Prime Minister Says 3 Farm Laws Will be Withdrawn in Upcoming Parliament Session.

Goa Assembly polls will be held in February- March next year along with Uttar Pradesh, Punjab, Uttarakhand and Manipur. The BJP has been in power in the coastal state since 2012. In Goa, the BJP will be contesting the first election after the death of former defence minister Manohar Parrikar, one of the tallest leaders of the party in the state. The party is facing challenges from Arvind Kejriwal's Aam Aadmi Party (AAP) and Mamata Banerjee's Trinamool Congress (TMC) and the Congress.

(The above story first appeared on LatestLY on Nov 20, 2021 02:23 PM IST. For more news and updates on politics, world, sports, entertainment and lifestyle, log on to our website latestly.com).