The two-time MP and former IPS officer, Simranjit Singh Mann, who believes in a separate Khalistan, is leading as the counting of votes for the bypoll of the AAP-stronghold Sangrur parliamentary constituency in Punjab was underway on Sunday. 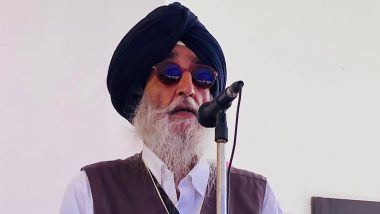 Chandigarh, June 26: The two-time MP and former IPS officer, Simranjit Singh Mann, who believes in a separate Khalistan, is leading as the counting of votes for the bypoll of the AAP-stronghold Sangrur parliamentary constituency in Punjab was underway on Sunday.

By 12 noon, the poll trends showed Shiromani Akali Dal-Amritsar (SAD-A) candidate Mann and Aam Aadmi Party's (AAP) Gurmail Singh in a neck-and-neck battle, with Mann leading in the majority of the rounds.

Mann, 77, last won the parliamentary elections from Sangrur in 1999.

He has been demanding the opening of borders with Pakistan for traders and is toeing the ideology of Sant Jarnail Singh Bhindranwale, who was killed during Operation Blue Star in 1984 that was carried out by the Indian Army in June 1984 to flush out militants hiding in the Golden Temple complex in Amritsar. Bypoll Results 2022 Live Updates: Tripura Chief Minister Manik Saha Wins Town Bardowali Assembly Constituency With 17,181 Vote.

The bypoll for Sangrur was necessitated following the resignation of Bhagwant Mann, who won the Assembly election in February from the Dhuri constituency, and became the Chief Minister.

The other key contenders are death row convict Balwant Singh Rajoana's foster sister Kamaldeep Kaur, 44, who is in the fray on the Shiromani Akali Dal (SAD) ticket, BJP's Kewal Dhillon, 72, and Dalvir Singh Goldy, 40, of the Congress. Both Dhillon and Goldy are former legislators.

Bhagwant Mann had won his first election as Sangrur MP in 2014 with a record margin of over 2.10 lakh votes defeating SAD candidate Sukhdev Singh Dhindsa.

In 2019 Bhagwant Mann was the lone AAP MP in Parliament and he had defeated the then Congress candidate Kewal Singh Dhillon by more than 1.1 lakh votes.

All nine Vidhan Sabha constituencies coming under the Sangrur parliamentary seat was won by the AAP MLAs with a record mandate.

(The above story first appeared on LatestLY on Jun 26, 2022 01:00 PM IST. For more news and updates on politics, world, sports, entertainment and lifestyle, log on to our website latestly.com).