Punjab: Man Shot At in An Unsuccessful Robbery Bid in Mohali

A man was shot at during an unsuccessful attempt of robbery in Mohali on Friday evening. The victim was rushed to the hospital. Police have registered a case in the matter and investigation is underway. 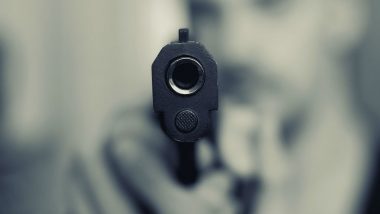 Chandigarh, September 26: A man sustained injuries after being allegedly shot at in an unsuccessful attempt of robbery in Punjab's Mohali on Friday evening. Reports inform that the victim along with his brother were on their way back to Mandi Gobindgarh when they were intercepted by a car near Swara village. Two armed men got off the car and tried to rob them of Rs 10 lakh. However, their attempt went in vain and one of fired a shot at the victim who was rushed to the hospital. A case has been registered in this regard and investigations are underway. Delhi Murder: 3 Minors Kill Man Over Rs 700 During Robbery Attempt.

Reports inform that Parmod Kumar and his brother Dhaminder Kumar were returning after selling scrap when they were allegedly intercepted by a car and two armed men in masks approached the brothers. One of the accused reportedly tried to snatch the bag of money from Dharminder. However, he managed to push the robber away by hitting him with a door of the car. Seeing this, the other accused allegedly opened fire that hit Parmod, reported the Hindustan Times. Uttar Pradesh: Man, Elderly Father Robbed of Over Rs 1 Lakh in Noida.

Parmod was reportedly rushed to the Government Medical College and Hospital , Sector 32. He sustained injuries. A case was filed under sections 307, 379B and 341 of the IPC as well as relevant sections of the Armed Act in the matter at the Kharar (Sadar) police station. Police are reportedly scanning CCTVs footage of the spot where incident took place. Investigations in the matter are underway.

(The above story first appeared on LatestLY on Sep 26, 2021 07:50 PM IST. For more news and updates on politics, world, sports, entertainment and lifestyle, log on to our website latestly.com).