A third standard Dalit student, who was undergoing treatment at a hospital in Ahmedabad after being beaten up at a school in Rajasthan's Jalore district for touching a water container, died on Saturday. 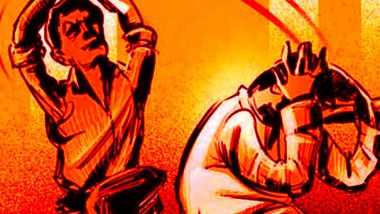 Jaipur, August 13: A third standard Dalit student, who was undergoing treatment at a hospital in Ahmedabad after being beaten up at a school in Rajasthan's Jalore district for touching a water container, died on Saturday.

On July 20, the boy had touched a pot of water which infurated his teacher Chail Singh, who thrashed him so badly that his condition became critical, said Devaram, the deceased child's father. Uttar Pradesh Shocker: 7 Held for Making Class 10 Dalit Student Lick Feet in Rae Bareli (Watch Video).

"My son was beaten up in the school in the name of casteism. His health started deteriorating after the thrashing, so we took him to the Jalore District Hospital. From there he was referred to Udaipur. As his health did not improve there, we took him to Ahmedabad a few days later. He died during treatment on Saturday afternoon," Devaram said.

Preliminary reports suggest that the vein of the child's ear had burst during the beating. The incident took place at Surana village in Jalore district. Soon after the child died, the police detained Chail Singh, the accused teacher.

The child was studying at Saraswati Vidya Mandir. An inquiry committee has been formed by the Chief Block Education Officer to probe the matter. Jalore SP Harshvardhan Aggarwal said that a case has been registered under the relevant sections of the IPC and the SC and ST (Prevention of Atrocities) Act.

(The above story first appeared on LatestLY on Aug 13, 2022 11:50 PM IST. For more news and updates on politics, world, sports, entertainment and lifestyle, log on to our website latestly.com).