Accompanied by a large number of supporters and a legal team, Shiv Sena MP Sanjay Raut went to the Enforcement Directorate (ED) office in south Mumbai in connection with the alleged money-laundering case pertaining to the Rs 1,034-crore Patra Chawl land scam, here on Friday. 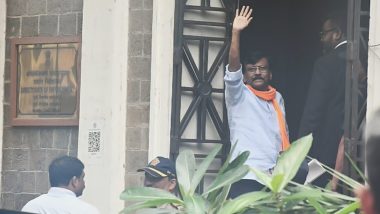 "Whatever it is, its my duty to join the probe as a law-abiding citizen... I don't blame the ED... I shall provide them whatever information they need," said Raut, while urging his followers not to crowd outside the agency's office.

Raut responded to the summons -- earlier on Monday, he excused himself in view of the massive political crisis raging in Maharashtra -- but said he would join the ED probe and give his statement on Friday. Shiv Sena Leader Sanjay Raut To Appear Before ED Today, Requests Party Workers Not To Gather Outside Probe Agency’s Office.

At that time he had accused the Centre for the action and challenged the ED to arrest him, shoot him or behead him, but he wouldn't go "the Guwahati way" -- referring to the Shiv Sena rebels camping in Assam.

Last April, the ED had slapped attachment orders on properties allegedly linked to Raut, his wife and a business associate, in connection with the land scam under the ED scanner.

These included a Rs 2-crore property belonging to Sanjay Raut's wife Varsha and another 8 plots of land worth Rs 9-crore in Raigad, belonging to his associate Pravin Raut, who was also arrested.

(The above story first appeared on LatestLY on Jul 01, 2022 01:30 PM IST. For more news and updates on politics, world, sports, entertainment and lifestyle, log on to our website latestly.com).