With red and swollen eyes, though Sharma apparently escaped serious injuries, he managed to reach home soon afterwards and then went to the police station to lodge a complaint, even as several BJP leaders slammed the government for the incident. 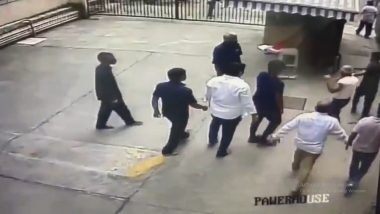 Mumbai, September 12: At least four Shiv Sainiks who were arrested for assaulting a retired Indian Navy officer for allegedly forwarding a cartoon on Chief Minister Uddhav Thackeray, were released on bail here on Saturday, officials said.

The victim, Madan Sharma, 65, is a resident of Lokhandwala Complex in Kandivali east, who had reportedly forwarded a cartoon showing Thackeray prostrating before pictures of Congress leader Sonia Gandhi and Nationalist Congress Party President Sharad Pawar, on a WhatsApp group of his society members. Shiv Sena Workers Assault Retired Navy Officer in Mumbai After He Forwarded Cartoon of Uddhav Thackeray on WhatsApp.

The incident happened on Friday afternoon when a group of around 8-10 persons, all allegedly Shiv Sainiks, came and assaulted Sharma in his society compound.

The Shiv Sainiks, including a Shakha Pramukh Kamlesh Kadam, found the cartoon objectionable, stormed inside Sharma's complex and attacked him, said an official of Samata Nagar Police Station here.

Earlier, though nobody from the society had reacted to the cartoon, someone had forwarded it Kadam, his medico daughter Dr. Sheela Sharma said.

A CCTV clip of the society posted by local Bharatiya Janata Party MLA Atul Bhatkalkar shows the attackers chasing Sharma, dragging him by the collar, pulling his shirt and attacking with no intervention from the society security personnel.

With red and swollen eyes, though Sharma apparently escaped serious injuries, he managed to reach home soon afterwards and then went to the police station to lodge a complaint, even as several BJP leaders slammed the government for the incident. Shiv Sena's Kamlesh Kadam And 3 Others Arrested by Mumbai Police For Assaulting Retired Indian Navy Officer.

The four and some other unknown attackers have been charged under various sections of Indian Penal Code, including for unlawful assembly and rioting, said Additional Commissioner of Police (North) Dilip Sawant.

Several BJP leaders, including Leader of Opposition Devendra Fadnavis slammed the Sena and ruling Maha Vikas Aghadi government for the attack, and demanded stringent action against the perpetrators.

(The above story first appeared on LatestLY on Sep 12, 2020 05:10 PM IST. For more news and updates on politics, world, sports, entertainment and lifestyle, log on to our website latestly.com).