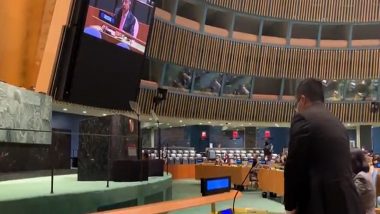 New York, September 25: An Indian delegate at the United Nations General Assembly (UNGA) Mijito Vinito on Friday staged a walk-out when Pakistan Prime Minister Imran Khan began his speech. News agency ANI shared the video of the incident. In the video, it could be seen that Vijito, who was sitting at the first row of the assembly hall, walked-out when Imran Khan began speaking. Khan addresses the 75th United UNGA session via a video link. UNGA 2020 General Debate: Ahead of PM Narendra Modi's Speech, Spectacle in Manhattan Turns Spotlight on Art of Pre-Recorded 15 Minute Pitch.

The Pakistan PM as usual attacked India over Kashmir  issue and alleged "human rights violation in the region"  during the 75th session of the UNGA. He alleged that India is destroying the identity of Kashmiris. Targeting the Narendra Modi government and the Rashtriya Swayamsevak Sangh, the Pakistan PM said that the secularism of Gandhi and Nehru was replaced by the dream of creating a Hindu Rashtra.

Meanwhile, PM Narendra Modi will address the UNGA on Saturday. He is scheduled as the first speaker in the forenoon of September 26. Since the UNGA this year is being held in the backdrop of COVID-19 pandemic, it is being conducted mostly virtually. Prime Minister's address will, therefore, be via a pre-recorded video statement broadcast at the UNGA hall in New York.

(The above story first appeared on LatestLY on Sep 25, 2020 11:27 PM IST. For more news and updates on politics, world, sports, entertainment and lifestyle, log on to our website latestly.com).