The Cabinet Minister stated that as the matter is sub-judice and being heard in the Supreme Court, political parties should keep patience. 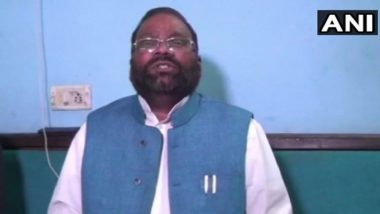 Thane, December 17: Uttar Pradesh Cabinet Minister Swami Prasad Maurya on Monday stated that move to bring the Ram temple ordinance in the parliament and make it as a law is not appropriate, as the matter is sub-judice and being heard in the Supreme Court. However, he also opined that it shouldn’t be made a matter of debate and political parties should wait for the Supreme Court’s judgment.

Expressing his opinion on the Ram Temple issue at the Akhil Bharatiya Mali Mahasangh in Thane, Maurya said, “The matter (RamTemple) is in Supreme Court. It shouldn't be made a topic of debate. It seems that those who debate on it consider themselves above SC. Everyone should wait for SC's judgement. Until then, Parliament has no right to formulate a law.” UP Dy CM Evades Questions on Swami Prasad Maurya 'praising' Jinnah.

However, state Chief Minister Yogi Adityanath in October had hinted that other options could also be considered. He had said, “The issue should be settled as soon as possible as the responsibility of maintaining law and order in the state is on us. Though consensus remains the best solution, there are many other ways to thrash it out.”

But, after being faced with criticism for his comments, he stated in November, “People have demanded a scenic makeover to Ram Lalla and the government is working on this. We have all the options. We believe in the Constitutional system and we will solve this problem within Constitutional limits.”

Demanding an ordinance to be passed soon, RSS’s executive head Suresh ‘Bhaiyyaji’ Joshi during the VHP’s mega rally in Delhi had said, “We have no conflict with any community, We are not begging but expressing sentiments. Making law is only option for Ram temple. Movement will continue till commitment is fulfilled.” VHP Rally in Delhi: RSS Executive Head Suresh Bhaiyyaji Joshi Says 'Bringing Law Only Option to Build Ram Temple in Ayodhya'.

The Supreme Court in November had adjourned the hearing of the Ram Mandir-Babri Masjid land dispute case and set the hearing date as January 2019.

(The above story first appeared on LatestLY on Dec 17, 2018 07:01 PM IST. For more news and updates on politics, world, sports, entertainment and lifestyle, log on to our website latestly.com).