Two members of a family died and three others were hospitalised after they ate macaroni. The incident took place in Shahjahanpur of Uttar Pradesh. 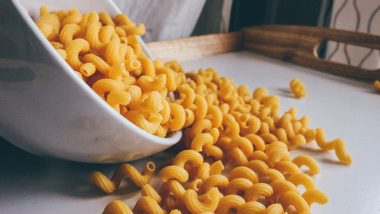 Lucknow, July 13: Two members of a family died and three others were hospitalised after they ate macaroni. The incident took place in Shahjahanpur of Uttar Pradesh. Shankarlal, 35, and his 16-year-old son Rajnish died on July 11. Rajnish had purchased macaroni from a local shop on July 7. While no complaint has been registered yet, police along with the food safety officer have initiated an investigation. Uttar Pradesh: Women With Her 5 Children, Starving Due to No Income During Lockdown, Hospitalised in Aligarh.

Rajnish's mother Usha Devi had prepared macaroni on the night of July 7. Shnkarlal, Rajnish, Usha Devi and two other children - Vishan and Kiran - had eaten macaroni. On the same night, all of them started had started feeling unwell and were taken to a primary healthcare centre. They were then shifted to a private clinic in Narotha village. Bihar: More Than 100 People of Kothwan Village in Munger Fell Ill After Consuming Prasad.

Shankarlal and Rajnish died on July 11 during the treatment, a report by TOI said. Usha, Vishal and Kiran are now receiving treatment at a district hospital. Following the incident, local authorities collected samples from macaroni and the oil used to prepare it, and sent them to a laboratory for tests. "We are looking at all the possibilities. The food safety team didn’t find the raw macaroni poisonous during initial tests," Khuthar SHO Jaishankar Singh was quoted as saying.

Cops are waiting for the lab results. They are also checking if someone mixed any substance in the macaroni. The exact cause of the two deaths has not been confirmed. "We didn’t get the samples of the prepared macaroni consumed by the family. There is also a possibility of reaction of medicines given by the quack treating them. Now, the viscera report will confirm the substance that caused the deaths," food inspector JP Singh said.

(The above story first appeared on LatestLY on Jul 13, 2021 04:27 PM IST. For more news and updates on politics, world, sports, entertainment and lifestyle, log on to our website latestly.com).