The Uttar Pradesh government on Saturday said that strict action will be taken against those responsible for hacking the official Twitter handle of the state Chief Minister's Office (CMO). 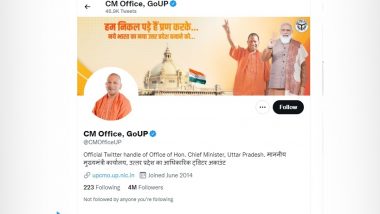 Lucknow, April 9: The Uttar Pradesh government on Saturday said that strict action will be taken against those responsible for hacking the official Twitter handle of the state Chief Minister's Office (CMO).

"There was an attempt by anti-social elements to hack the official Twitter account of the Chief Minister's Office @CMOfficeUP at 12.30 am on April 9. Some tweets were posted by them which were recovered immediately," the state government tweeted.

The Yogi Adiyanath government said it has taken help from cyber experts to find those responsible for the hacking and strict action will be taken against them.

The Twitter handle @CMOfficeUP has over 40 lakh followers. The unidentified hackers also posted a thread of some random tweets on the Uttar Pradesh CMO account. Twitter Account of UP Chief Minister's Office Restored After it Was Hacked on Saturday.

The personal Twitter handle was restored after getting "very briefly compromised", the Prime Minister's Office (PMO) had said in a tweet, after it shared a link promising a bitcoin giveaway.

(The above story first appeared on LatestLY on Apr 09, 2022 03:24 PM IST. For more news and updates on politics, world, sports, entertainment and lifestyle, log on to our website latestly.com).