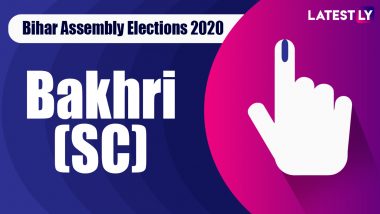 Bakhri (SC) Vidhan Sabha constituency is one of the 243 in the Bihar Assembly. The seat falls under the Begusarai district and is reserved for Scheduled Castes (SC) candidates. It is a part of Begusarai Lok Sabha constituency. CPI's Suryakant Paswan won the seat in Bihar Assembly Elections 2020. Bihar Vidhan Sabha Elections 2020 took place in 3 phases this time, and not 5, which has usually been the norm.

Upendra Paswan, of the Rashtriya Janata Dal (RJD), was the outgoing MLA from the Bakhri (SC) constituency. In 2015 Bihar Assembly Elections, he had defeated Ramanand Ram of the Bharatiya Janata Party (BJP) by a huge victory margin of over 40,000 votes. In 2010 Bihar Elections, it was BJP’s Ramanand Ram who beat Ram Binod Paswan of the LJP be a vote margin of over 15,000 votes.

Come 2020 Bihar Assembly Elections, the main contenders from the Bakhri (SC) seat were BJP’s Ramshankar Paswan, and CPI’s Suryakant Paswan. The seat has been a musical chair between the BJP, CPI, RJD, and the Congress over the years.

(The above story first appeared on LatestLY on Nov 11, 2020 02:16 PM IST. For more news and updates on politics, world, sports, entertainment and lifestyle, log on to our website latestly.com).