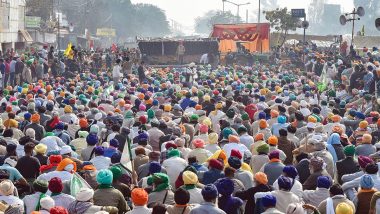 New Delhi, December 6: The Bharat Bandh call issued by farmer groups for Tuesday has received the backing of major political parties. Several trade and transport unions also issued a statement to support the one-day strike, which is aimed at mounting pressure on the Centre to withdraw the controversial farm reform laws. Here's the list of political groups that are backing the stir.

Congress: The largest national Opposition party will hold demonstrations outside regional party offices and headquarters on December 8, Tuesday, to mark their solidarity with the protesting farmers. Tribal Army to Support Nationwide Strike Called by Farmers' Unions.

Trinamool Congress: West Bengal Chief Minister Mamata Banerjee has extended "moral support" to the bandh called by farmers. The TMC cadres would be holding sit-in protests to express their support to the farmers' cause.

Rashtriya Janata Dal: The primary opposition party of Bihar would also be supporting the bandh called by farmers to mark their opposition to the farm laws. RJD de-facto chief Tejashwi Yadav was on Saturday booked by the state police for holding a stir in a prohibited area without due permission.

(The above story first appeared on LatestLY on Dec 06, 2020 04:06 PM IST. For more news and updates on politics, world, sports, entertainment and lifestyle, log on to our website latestly.com).