Divya Spandana, Congress IT Cell Chief, Does it Again On Twitter, Gets Trolled For Comparing PM Narendra Modi With 'Bird Dropping'

Former Congress MP Divya Spandana, who is also handling the party's IT Cell, has yet again become a victim of trolls on the social media. 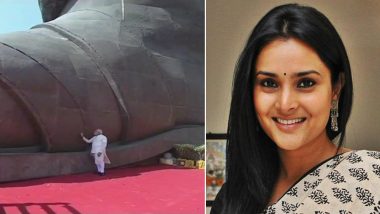 New Delhi, November 1: Former Congress MP Divya Spandana, who is also handling the party's IT Cell, has yet again become a victim of trolls on the social media. Spandana is being trolled on Twitter after she tweeted a photo of Prime Minister Narendra Modi standing near the feet of the Sardar Vallabhbhai Patel Statue of Unity, comparing him with 'bird dropping'. She has posted the image with the caption 'Is that bird dropping?' The Congress party member is being criticised with many saying that she is not being able to take Modi government's achievements in good taste. Divya Spandana Ramya, Congress IT Cell Chief, Booked for Sedition After Her 'Chor' Tweet Against PM Modi.

Here is the tweet posted by Spandana and also some reactions to her tweet. "You guys just don’t learn that the more you mock and ‘put down’ your own Prime Minister, you only end up lowering yourselves. Nation’s respect for him only rises," says a comment by a BJP youth wing member. Divya Spandana Ramya Responds to Rumours, Says Not Resigning From Congress IT Cell.

Is that bird dropping? pic.twitter.com/63xPuvfvW3

Earlier in September, Spandana was booked by the police in Uttar Pradesh for a tweet against PM Narendra Modi. Sedition charges were slapped against her after she had tweeted a photoshopped photograph of PM Modi painting 'Chor' on his hashtag 'Chor PM Chup Hai'. The Gomtinagar Police station had booked Ramya under Section 67 of The Information Technology (Amendment) Act and sedition (Section 124A) of the IPC, following a complaint by Lucknow-based lawyer Syed Rizwan Ahmad.

(The above story first appeared on LatestLY on Nov 01, 2018 01:14 PM IST. For more news and updates on politics, world, sports, entertainment and lifestyle, log on to our website latestly.com).