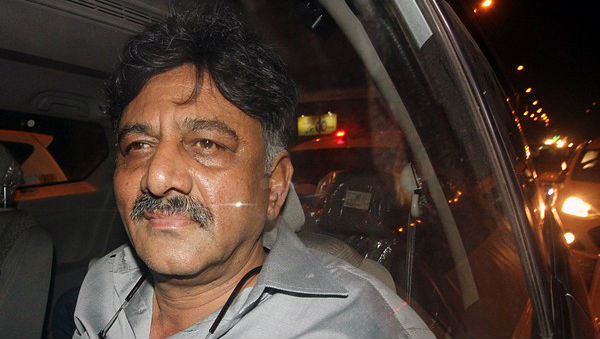 New Delhi, September 21: The counsel appearing for Karnataka Congress leader D K Shivakumar in a money laundering case on Saturday told a Delhi court that the Enforcement Directorate (ED) is "desperate" to keep the latter in jail. Special Judge Ajay Kumar Kuhar was hearing the bail plea of Shivakumar, who was sent to judicial custody in Tihar jail earlier this week. It has reserved the order on the plea till September 25. Enforcement Directorate Slaps Rs 230 Crore Fine on PwC for FEMA Violations.

During the course of proceedings, senior advocate Abhishek Manu Singhvi, representing Shivakumar, said that Shivakumar has "only twenty active accounts" as opposed to "317 accounts" contended by the agency. "Show me the 21st account and I would sit down. The agency is very desperate to keep Shivakumar in jail," the counsel said.

Advocate Mukul Rohatgi, also representing Shivakumar, told the court that his client is not a flight risk. Additional Solicitor General K M Natraj, appearing on the behalf of the probe agency, while opposing the bail application, contended that Shivakumar is likely to hamper the investigation and may influence the witnesses.

Natraj added that many documents and material during both Income Tax and Prevention of Money Laundering Act (PMLA) probe have been recovered, which draws a strong inference of commission of the offence by Shivakumar. The counsel said that the probe into the case is at a "crucial stage", adding that the accused has remained non-cooperative and evasive during the interrogation.Shivakumar was arrested by the agency on September 3. DK Shivakumar Arrest: Violence Breaks Out During Protest by Congress Workers in Bengaluru.

The money laundering case was registered by the agency against Shivakumar in September last year, based on a complaint filed by the Income Tax department. The I-T department, during the initial probe, had allegedly found unaccounted and misreported wealth linked to Shivakumar. The department had that stated it came across money laundering and hawala operations involving a network of persons across Delhi and Bengaluru.