The Income Tax department on Monday issued a notice to Novel Singhal, wife of Election Commissioner Ashok Lavasa. The notice issued to Novel Singhal pertains to her income as an independent director of multiple companies. 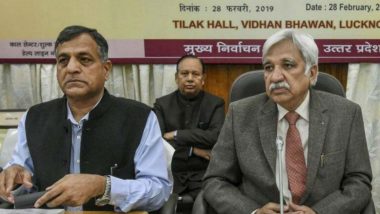 New Delhi, September 23: The Income Tax department on Monday issued a notice to Novel Singhal, wife of Election Commissioner Ashok Lavasa. The notice issued to Novel Singhal pertains to her income as an independent director of multiple companies. Singhal was appointed to the post in these companies after Ashok Lavasa became secretary of the government of India, News18 reported. Singhal is a former banker who resigned from SBI around 2005. Clean Chit to PM Modi, Amit Shah: CEC Sunil Arora Plays Down Ashok Lavasa's Dissent, Says 'EC Members Not Clones', says PM.

Lavasa hit the headlines during the 2019 Lok Sabha elections when he disagreed with the Election Commission's decisions in as many as 11 EC decisions involving complaints against Prime Minister Narendra Modi and Bharatiya Janata Party (BJP) chief Amit Shah. Lavasa had reportedly objected to clean chits given to PM Modi and Amit Shah in complaints related to violations of the Model Code of Conduct.

When his dissent was not recorded, Lavasa had decided to stay away from the meetings of the Full Commission. The 3-member "full commission" of the EC consists of the Chief Election Commissioner Sunil Arora and the two election commissioners - Lavasa and Sushil Chandra. The poll panel's rules express a preference for a unanimous view, but provide for a majority (2:1) ruling in the absence of unanimity.

"Minority decisions recorded by me in several cases continue to be suppressed in a manner contrary to well-established conventions observed by multi-member statutory bodies," Lavasa had written to Sunil Arora on May 16. "...It appears futile for me to participate in the deliberations of the commission until its lawful functioning is restored in terms of including the minority decisions recorded by me," he had said.

Replying to Lavasa, Arora in a statement said: "The 3 members of EC are not expected to be template or clones of each other, there have been so many times in the past when there has been a vast diversion of views as it can, and should be."

(The above story first appeared on LatestLY on Sep 23, 2019 09:03 PM IST. For more news and updates on politics, world, sports, entertainment and lifestyle, log on to our website latestly.com).