With Congress complaining of EVM tampering at Bhopal strongroom, EC admits CCTV failed to perform due to the power cut. 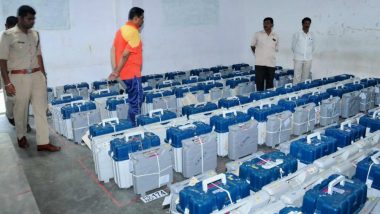 Bhopal, December 2: After being accused of electronic voting machines (EVMs) tampering by opposition parties, the Election Commission admitted that CCTV cameras installed at a Bhopal strongroom did not function for over an hour due to an unprecedented power cut on Friday. The EVMs were stored after the Madhya Pradesh polls at that place.

Acting tough, the election body also stated that it would take action against an official who allegedly delayed the handover of EVMs in Sagar by nearly two days. According to the official procedure, the EVMs should have been handed over soon after the completion of the polls on November 28. EVMs Reach Storage Centre 48 Hours After Elections in Madhya Pradesh's Sagar, Congress Alleges 'Tampering'

Releasing an official statement, the Elections Commission said, “A report obtained from the Bhopal Collector states that CCTV cameras and an LED display installed outside the strongroom did not function from 8.19 am to 9.35 am on 30.11.2018 due to the failure of electricity supply. Because of this, the recording could not be done during the given time period. An additional LED screen, an inverter and a generator have been installed to ensure continuous electricity supply.”

It further added, “The security force is also maintaining a logbook, and the machines are perfectly safe.” The EC took note of Congress’s objection to an unlocked door at the Old Jail strongroom and said that it "has been closed after the complaint".

Earlier, A Congress delegation met the EC to raise its concerns over the security of EVMs across Madhya Pradesh and Chhattisgarh.

Briefing the media after the meeting, Congress MP Vivek Tankha said that they complained of an extended blackout at a strongroom in Bhopal and Sagar. He also complained that a school bus bearing no number plate was used to transport reserve EVMs to the Sagar district collector's office after 48 hours of polling took place. He said, as reported by NDTV, “The spare EVMs were to be deposited two hours after the polls, not two days. This happened in the Khurai seat, from where the state home minister is contesting the polls.”

Stating that EVMs are safe, the EC said, “The responsible Nayab Tehsildar Sri Rajesh Mehra has been suspended for the delayed submission of machines.”

(The above story first appeared on LatestLY on Dec 02, 2018 11:39 AM IST. For more news and updates on politics, world, sports, entertainment and lifestyle, log on to our website latestly.com).