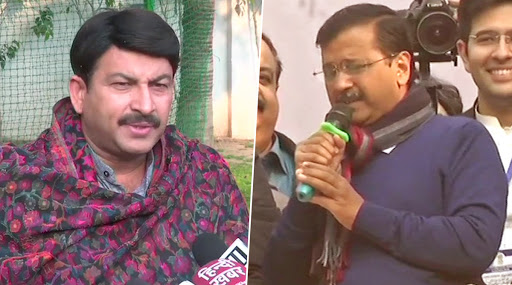 Addressing a press conference in the national capital, Tiwari said, as quoted by news agency ANI, "I thank the people of Delhi. I thank our party workers for their hardwork, they've done a lot. I accept the mandate of people of Delhi & congratulate Arvind Kejrwial. I hope he'll perform well as per the expectations of the people." Delhi Assembly Election Results 2020: BJP Chief JP Nadda Congratulates Arvind Kejriwal, Concedes Defeat, Says 'Will Play Our Role as Constructive Opposition'.

Adding more, Tiwari accepted that the results were not as expected, but claimed that vote share of BJP increased. He said, "We couldn't perform well, we'll evaluate this.Sometimes we get discouraged when results are not as per our expectations but I would like to tell our workers to not be disheartened...Compared to 2015 our winning percentage has increased."

Apart from this, BJP's national chief JP Nadda too conceded the defeat in the recently held Assembly polls is Delhi. He said, "BJP accepts the mandate of the people. We will play our role as a constructive opposition & raise public issues in the assembly. I congratulate Arvind Kejriwal, his party and hope that his govt will work for the development of the state."