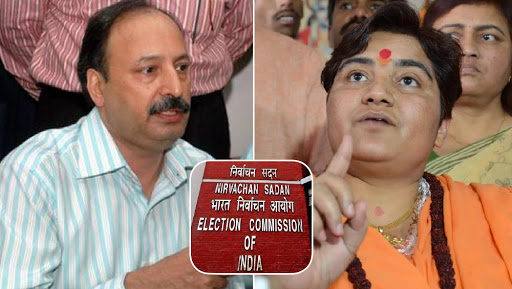 Bhopal, April 20: Election Commission on Saturday issued a notice to BJP Lok Sabha candidate Pragya Singh Thakur for violating the model code of conduct and sought an explanation from her for her comment on Late Hemant Karkare within a day.

Earlier on Friday, Thakur had made a controversial comment by insulting 26/11 martyr Hemant Karkare saying 'he died because he was cursed'. Adding on, she had stated that Karkare, who was the former Anti-Terrorism Squad (ATS) chief in the deadly 26/11 Mumbai terror attacks, was a traitor. PM Narendra Modi Defends Fielding Sadhvi Pragya Singh Thakur, Says It's ‘A Befitting Reply to Those Who Link Culture to Terrorism’.

This was not the first time she had said this. Earlier in her address, while making allegations on ex-chief of the Mumbai ATS, had said, "He used to say, I will do anything, I will do anything to bring the evidence but I will not leave Sadhvi. He was cunning and traitor."

On fielding an accused in 2008 Malegaon blast case from Bhopal parliamentary seat, PM Narendra Modi had stated that this is a 'Symbol' for those who falsely label the rich Hindu civilisation as 'terrorist'. He went further and had said in an interview to Times Now while taking a jibe at the Congress over saffron terror remarks, "The decision (to field Thakur) is a befitting reply to individuals who linked a whole religion and culture to terror."