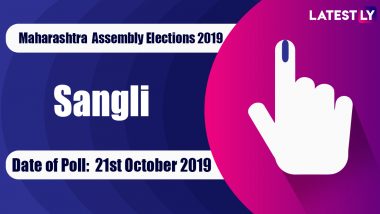 Dhananjay Alias Sudhir Hari Gadgil of BJP has won the Sangli Assembly constituency in Maharashtra by defeating the Congress candidate Prithviraj Gulabrao Patil. The constituency of Sangli is one of the 288 Vidhan Sabha (Legislative Assembly) constituencies in Maharashtra. Geographically, Sangli covers a total of eight constituencies, including itself. It forms an integral part of the Sangli Lok Sabha constituency. The Election Commission of India had announced October 21 as the date of single-phase voting in Maharashtra, and hence the electorate in Sangli will vote on the same day.

Sudhir Dada Hari Gadgil, who belongs to Bharatiya Janata Party (BJP), is the sitting MLA from Sangli constituency. In the 2014 Maharashtra Assembly Elections, he defeated Congress candidate and secured 80,497 votes in his favour. In 2009 Maharashtra Assembly Polls, it was Sambhaji Hari Pawar of BJP who had won the elections from Sangli constituency. Gadgil will be fighting the 2019 state elections on a BJP ticket, against Prithviraj Gulabrao Patil of the Congress among other candidates. Assembly Elections Results 2019: BJP-Shiv Sena Alliance Gets Clear Mandate in Maharashtra; Hung House in Haryana.

On September 21, the Election Commission had announced the election dates for Maharashtra Assembly Elections 2019 and Haryana Assembly Polls 2019. The last date to file the nominations and its withdrawal was set to October 4 and October 7 respectively.

In its guidelines, the EC had directed the poll officials that all the necessary services and facilities were to be provided to senior citizens and specially-abled people for the smooth run of polls. The EC has also directed to ensure that at least one polling station in every assembly constituency is women-exclusive only.

The term of the current regime in Maharashtra is set to end on November 9. With the date of voting, and eventually the results, coming nearer, the political barbs hurled on either camp have shot up incessantly. It will be interesting to see which alliance wins the election and goes on to make the next government. For more news and latest updates about Maharashtra Assembly Elections 2019, stay tuned to LatestLY.

(The above story first appeared on LatestLY on Oct 16, 2019 03:39 PM IST. For more news and updates on politics, world, sports, entertainment and lifestyle, log on to our website latestly.com).