Sharad Pawar Has This Advice For Rahul Gandhi on Revamping Congress, Criticism of PM Narendra Modi

NCP supremo Sharad Pawar has advised Rahul Gandhi to take over reins of the Congress party and travel across the country. 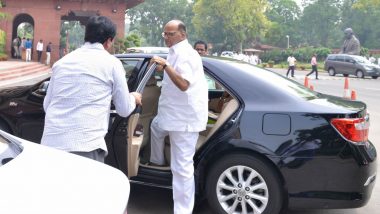 Asked about the Congress party, Pawar said: "I have seen Congress for several years now. And I want to note one thing. Whether anybody accepts or not, Gandhis are a cementing force for Congress. Soniaji succeeded in bringing the Congress together. Now, Congressmen have accepted Rahul Gandhi. It is their internal matter. And it is up to the rank and file of the party. But I think they should hand over the entire responsibility of the party to him." Maharashtra Congress Minister Nitin Raut Hits Back at Sharad Pawar For Chiding Rahul Gandhi on India-China Face-Off.

The NCP chief said Rahul Gandhi should not take over reins of the Congress party, but also reach out to leaders and workers. "He should start touring the country. He should travel, meet party workers. This is something he had done some time ago. He should start doing it again. It is important to mobilise party workers," Pawar said. Asked about the former Congress president's consistent attack on PM Modi, Pawar said he should avoid that.

"We have seen that when you target any one person individually, your credibility goes down. It should be avoided," Pawar said. The NCP chief also said that the BJP trying to destabilise the Maharashtra government. Pawar's NCP is a partner in the Shiv Sena-led Maha Vikas Aghadi government in Maharashtra. Congress is also an ally of the state government.

(The above story first appeared on LatestLY on Jul 29, 2020 05:03 PM IST. For more news and updates on politics, world, sports, entertainment and lifestyle, log on to our website latestly.com).