Samajwadi Party president Akhilesh Yadav on Saturday said his party will provide jobs to 22 lakh youths in the IT sector if it is voted to power in the Uttar Pradesh Assembly polls. Yadav was speaking at a press conference here. 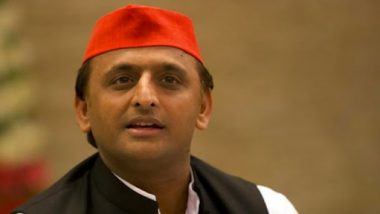 Lucknow, January 22: Samajwadi Party president Akhilesh Yadav on Saturday said his party will provide jobs to 22 lakh youths in the IT sector if it is voted to power in the Uttar Pradesh Assembly polls. Yadav was speaking at a press conference here.

Mainpuri is the Lok Sabha constituency of SP patriarch and Yadav's father Mulayam Singh. "Twenty-two lakh youths will be given jobs in the IT sector under the 'Naukri-Rozgar Sankalp' series by the Samajwadi Party after coming to power in the 2022 assembly elections," Yadav said.

"The Samajwadi Party will also build IT hubs in Kanpur, Agra, Bareilly, Jhansi, Varanasi and Purvanchal besides Lucknow and fulfil its promise of providing jobs to more than 22 lakh youths in the IT sector," he said.

These 22 lakh jobs will be in addition to recruitment in police and other government departments, he added. On the work done by the erstwhile SP dispensation, Yadav said, "The SP government had made efforts to take the state forward in the IT sector. HCL was the first to invest in Chak Gajaria Farm here. Had the work done during the SP government been taken forward, Lucknow could have been recognised as an IT hub."

"But nothing was done later. In the HCL campus, 5,000 people are working and several others could have got indirect jobs," he said. The SP government from 2012-17 was headed by Yadav.

The SP president also hit out at the BJP, accusing it of stopping all development schemes started by his party's government. The BJP showed false advertisements to the public and cheated the farmers, youth and labourers, he alleged.

Cows are starving in 'gaushalas' under the BJP's rule. The 'Kamdhenu Yojana' started by the Samajwadi government was stopped by the incumbent government, he said, adding that 'gaushalas' will be improved after his party comes to power.

Former Congress MP Pravin Singh Aron and his wife Supriya joined the SP in the presence of Yadav here. Supriya was named by the Congress as its nominee from the Bareilly Cantt assembly seat. She will now contest the polls from the same seat as the SP candidate.

Earlier, the SP had declared Rajesh Agarwal as its candidate from the seat. He has been replaced by Supriya. The Uttar Pradesh Assembly polls will be held in seven phases between February 10 and March 7. The counting of votes will take place on March 10.