Who Is Kamegowda? Know About The Man Granted Lifetime Bus Pass by Karnataka Govt For His Efforts to Save Water 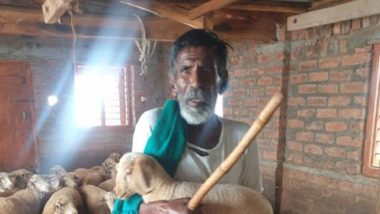 Bengaluru, July 2: The Karnataka State Road Transport Corporation on Thursday announced a lifetime bus pass for Kamegowda, an octogenarian shepherd who has spent his entire life with the mission to save water. Known as the "Man of Lakes", he has constructed dozens of ponds with the intent to provide water for animals - left quenching with thirst in the summer months. NASA Captures Maharashtra’s Lonar Lake That Turned Pink Mysteriously, Know Why 50,000 Years Old Crater Lake Changed Its Colour.

A shepherd since the age of 5, the 84-year-old Kamegowda is a shepherd to this date. His primary job is to selflessly dig and construct lakes in the hillside area of his village - Daasanadoddi - located in Mandya district of Karnataka.

Through his earnings over the past decades, donations and award money, Kamegowda has succeeded in creating 14 lakes in his village - which are used by animals and birds in summer months to quench their thirst. The lakes are also crucial for water usage by humans in drought-like situations.

His mission is not over. Kamegowda continues to construct ponds and build check dams to ensure maximum conservation of rainwater. His step is aimed at addressing the shortage of drinking and irrigation water in the summer months.

Kamegowda received nationwide fame after he was mentioned by Prime Minister Narendra Modi in the latest edition of his monthly radio show - Mann Ki Baat. Modi lauded his efforts and said that the nation should be proud of his selfless efforts.

Union Minister for Jal Shakti Gajendra Singh Shekhawat reached out of Kamegowda via a phone call and also extended all possible aid from the Centre. He was also called by Chief Minister BS Yediyurappa, offering all measures from the state government to help him and his mission.

As per Kamegowda's suggestion, Yediyurappa reportedly ordered a transfer of Rs 25 lakh from the state exchequer towards his water conservation mission. The state would also construct a house for his family and provide a job to his son in the Forest Department.

(The above story first appeared on LatestLY on Jul 02, 2020 06:25 PM IST. For more news and updates on politics, world, sports, entertainment and lifestyle, log on to our website latestly.com).