Malmas 2020 Dates and Significance: What Is Adhik Maas? Why Is It Considered Inauspicious? Here’s Everything You Should Know About Purushottam Maas Ahead of Navratri 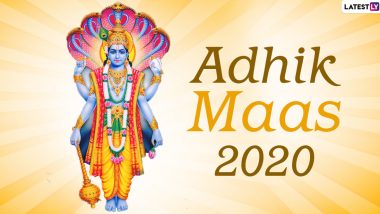 The ongoing Hindu year as per the Lunar calendar has Adhik Maas, or Adhik Ashwin. Also known as Purushottam Mass or Malmas, it is an extra month in the Hindu calendar that is inserted to keep the solar and lunar calendars aligned. Purushottam is an epithet of Lord Vishnu, to whom the month is dedicated. It is important to note here that the position of Adhik Maas or Malmas among the other months reoccurs every 32.5 months. Malmas 2020 began from September 18 and the month will end on October 16, ahead of Navrati. But what is Adhik Maas or Malmas? Why is it considered inauspicious? Is there any significance related to the month? In this article, we will bring all the answers related to this extra month in the Hindu calendar this year. Ahead of Navratri 2020, know everything about the Purushottam maas. Navratri 2020 After Adhik Maas in the Leap Year: Know More About This Auspicious Phenomenon That Is Taking Place After 165 Years and Its Astrological Impacts.

What is Adhik Maas? Know its Significance

Adhik Maas or Malmas is an extra month in the Hindu calendar. Also called as Purushottam Maas, the month is inserted to keep the lunar and solar calendars aligned. The reason, it is also called Purushottam, is because it is an epithet of Lord Vishnu, to whom the month is dedicated. Adhik Maas adopts the name of the month that follows. This is the extra month falls after Ashwin; this is why it is also known as Adhik Ashwin Maas. The month is a time for prayer, fasting, charity and self-improvement.

The solar year is made up to 365 days and about 6 hours and the lunar year is made up to 354 days. Hence, there is a gap of 11 days, 1 hour, 31 minutes and 12 seconds between the lunar and the solar years. As this gap accumulates each year, it approximates in three years to one month. Adhik Ashwin 2020 began from September 18 and will continue till October 16. During this time, there will be two new moons, and hence there is a 30-day gap between Pitru Paksha and Devi Paksha. Because of this, Navratri 2020 will begin on October 17.

Why is Adhik Maas Considered Inauspicious?

Adhik Maas is also called Malimmach or Mala Maas, which means, ‘unclean month.’ The month is considered inauspicious, and no happy occasions are conducted during this time. Events such as weddings, business ventures, house-warming are not held during this month. People are encouraged to involve in prayer, fasting, charity, and self-improvement during this month.

On the other hand, in Machhegauri village in Nepal, a month-long mela (fair) is celebrated during Adhika Maas. It is generally believed that one can wash away all the sins by taking a bath in the pond at Machhenarayan temple during this month. As the Adhik Ashwin Maas 2020 has begun, people have devoted themselves in prayers and self-improvement before beginning the Navrati 2020 celebration.

(The above story first appeared on LatestLY on Sep 21, 2020 12:25 PM IST. For more news and updates on politics, world, sports, entertainment and lifestyle, log on to our website latestly.com).