Celebrities, sportspeople and politicians have paid their tribute to one of the greatest leaders our nation has seen on his 87th birth anniversary. 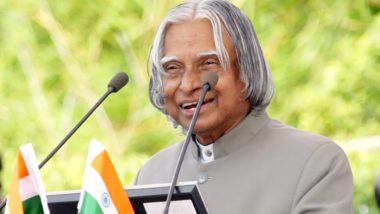 October 15 marks the birth anniversary of great Indian scientist and politician APJ Abdul Kalam. Avul Pakir Jainulabdeen Abdul Kalam was born on October 15, 1931 in Madras presidency. He did some very significant contribution to the fields of science. Kalam was not only a remarkable scientist but a politician that people were very fond of. He was the 11th President of India and served the country from July 2002 to July 2007. On his 87th birth anniversary, Twitterati fondly remembers the 'Missile Man' of India.

Kalam was fondly called the 'People's President'. Before he turned to the field of politics, he served as a scientific adviser to the defense minister. He became a national hero post the nuclear weapons tests carried out by India in the year 1998. Celebrities, sportspeople and politicians have paid their tribute to one of the greatest leaders our nation has seen.

Former President Abdul Kalam was the key person behind India's missile program and other critical research programs. On his birth anniversary we recall his life's work along with his message of peace and goodwill. #AbdulKalam pic.twitter.com/Hhb8gROMhm

My tribute to the former President of India, great teacher and eminent scientist "Bharat Ratna" Dr. A. P. J. #AbdulKalam Ji on his birth anniversary. pic.twitter.com/FFlu5CUTUJ

A scientist, a visionary, a leader - Dr APJ #AbdulKalam was all this & much more. As the Missile Man of India, he ignited a thousand minds & gave India its Wings of Fire.

My tributes and birthday greetings to the late President, Dr #AbdulKalam Ji on his 87th birth anniversary! He was an epitome of love, compassion & humanity! pic.twitter.com/d1RIgj2IKy

Dr Kalam died at the age of 83 in Shillong on the evening of July 27. Kalam got two of the highest honours in the country- the Padma Vibhushan (1990) and the Bharat Ratna (1997).

(The above story first appeared on LatestLY on Oct 15, 2018 10:03 AM IST. For more news and updates on politics, world, sports, entertainment and lifestyle, log on to our website latestly.com).