Bloomsday is celebrated on June 16 every year to celebrate the life and legacy of the Irish writer, James Joyce as an ode to one of the finest novels of the 20th century -Ulysses. 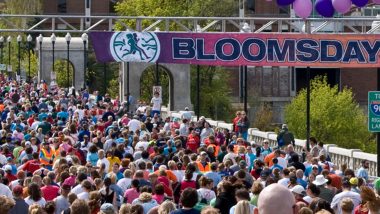 Bloomsday is celebrated on June 16 every year to celebrate the life and legacy of the Irish writer, James Joyce as an ode to one of the finest novels of the 20th century -Ulysses. The Irish novelist, poet and teacher is regarded as one of the most influential novelists of the 20th century and his book Ulysses was is considered a classic among literary fanatics. June 16th is said to be one of the best bays with the protagonist of Joyce's novel- Leopold Bloom. Ergo, Joyce's fans and friends began marking this day as Bloomsday.

Joyce's novel considered a masterwork and a prominent piece of literature of the 20th century, was published in Paris in 1922. It is widely believed that Bloomsday is celebrated in Ireland and across the world to mark the conception of Joyce's protagonist Leopold Bloom in the book Ulysses that took place on June 16th.

James's Friends started to celebrate this day and it was recorded in a letter by James Joyce to Miss Weaver on June 27, 1924, which intimated to a group of people who celebrated what they called Bloomsday on 16 June. The fervour for the book spread and the first-ever Bloomsday was celebrated in 1929. Ireland marked their first Blooms Day Celebration in 1954.

According to historical evidence that's recorded in Time magazine, this day wasn't just a celebration of the inception of James protagonist but it was also a significant day for the author himself. According to Time, Many a moons ago" James encountered a girl named Nora Barnacle who had come “sauntering” into his life out of the Dublin hotel where she worked as a waitress." On June 16th 1904, and James and Nora went for their first walk. The day left quite an impression on James and he later made a tangential record of it in the book

(The above story first appeared on LatestLY on Jun 14, 2021 04:49 PM IST. For more news and updates on politics, world, sports, entertainment and lifestyle, log on to our website latestly.com).