Under this collaboration, 100 restaurant partners such as Smoke House Deli, Paradise Biriyani, Fatty Bao, Hitchki, Mainland China, Oh Calcutta, Monkey Bar and others would offer a unique 'Dine in the Dark' experience by switching off all non-essential lights during dinner hour. 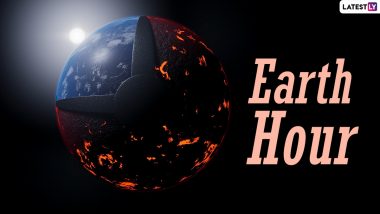 New Delhi, March 25: A number of corporates like Indigo Airlines, HSBC India, Zomato and The Imperial, have decided to take concrete actions a day before Earth Hour this year on Saturday.

What started in 2007 as a one hour light's out event in Australia's Sydney, has now spread across 190 countries uniting the people including individuals, communities, businesses and countries to create a positive environmental impact through the power of collective action, said WWF India, which spearheads the campaign for Earth Hour that will be from 8 p.m. to 9 p.m.

The first to start 'Climate Conscious Delivery' in India, Zomato is partnering with WWF India on Earth Hour to raise awareness among their partners and approximately 36.4 million users.

Under this collaboration, 100 restaurant partners such as Smoke House Deli, Paradise Biriyani, Fatty Bao, Hitchki, Mainland China, Oh Calcutta, Monkey Bar and others would offer a unique 'Dine in the Dark' experience by switching off all non-essential lights during dinner hour. Why Is Earth Hour Important? How to Celebrate? All Frequently Asked Questions Answered.

All Zomato employees globally are being encouraged to observe Earth Hour in their homes. Part of the India Plastics Pact, Zomato is committed to a cleaner and greener world through Earth Hour with WWF.

The luxury heritage hotel, The Imperial in New Delhi will be joining by not just supporting the lights out but also by organising physical 'Nature Trails' in central Delhi with the aim to take their guests and diners away from digital screens into nature. Meanwhile, Indigo Airlines has announced that it will be making Earth Hour's date and time on 1,800 flights for two days up to Saturday 6 p.m.

Similarly, HSBC Bank that is already committed to accelerating a net zero carbon economy, has announced that its 0.6 million customers and 32,000 employees are being encouraged to join the campaign on Saturday. The employees will also see the roll out of the plastics internal challenge and a nomination of 'Conservation Champions' will be initiated to highlight and felicitate individuals from the HSBC community.

Partnering with WWF for the first time for Earth Hour, 34 of the WeWork buildings across six cities will observe the switch off on Saturday. Another first time supporter, the commercial portfolio of TATA Realty Intellion Office has put up pledge walls, Photo Booths across four of their commercial projects in three cities. Approximately 30,000 employees across various companies will be in support of Earth Hour this year, WWF said.

All Indian Hotels Company Limited's hotels together with their guests will participate in the Switch Off activity and two hotels, Umaid Bhawan Palace and Ram Bagh Palace Hotel, will share live footage as well. ‘Save Earth’ Slogans, WhatsApp Stickers, Facebook Greetings, Signal Messages & Telegram Photos To Encourage Everyone To Support Our Nature.

And then there are other partners, WWF said, that are chipping in with their own unique ways. Vistara is carrying a full-page Earth Hour poster for the entire month in the latest issue of the Vistara Magazine that is available aboard nearly 250 flights per day.

WWF India's ambassadors, staff and citizens at the on-ground activities across India would be seen wearing 100 per cent cotton Indian Terrain t-shirts, the official merchandise partners of the 'Shape Our Future' t-shirt this year, WWF spokesperson added.

(The above story first appeared on LatestLY on Mar 25, 2022 09:02 PM IST. For more news and updates on politics, world, sports, entertainment and lifestyle, log on to our website latestly.com).