Guru Purnima 2021: Know Date, Timing, Rituals and Significance of the Holy Festival That Celebrate the Bond Between Teacher and Student

As the holy festival of Guru Purnima approaches, here we have mentioned the exact date, time, ritual and other significance of the day that celebrated the bond between a Guru and his student. 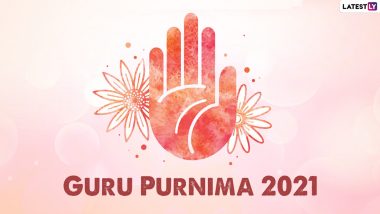 The festival of Guru Purnima will be celebrated on July 24 this year. According to the Hindu calendar, the holy festival of Guru Purnima is celebrated every year on the full moon day of the month of Ashadha. Worshipping Gurus (Teachers) has special significance on this day. In India, this day is celebrated with great reverence. The importance of the Guru has also been mentioned in religious scriptures. Guru is considered superior to God because it is the Guru who shows the way to reach God.

Knowledge cannot be achieved without the help of a Guru. Everything becomes possible with the grace of Guru. Teachers or gurus can lift a person out of any adverse circumstances. Guru Purnima is also known as Vyasa Purnima. According to religious belief, the day is celebrated every year to commemorate the birth ceremony of Ved Vyasa, who was the author of the Indian epic-Mahabharata.

According to the Hindu religious belief,  Guru Purnima is observed every year to commemorate the birth of Ved Vyasa, who had edited the Vedas divided them into four. He also wrote the Mahabharata and the 'Fifth Veda'.  It is believed that offering prayers to the Mahaguru help to evade darkness from life.  However, according to Buddhism, on the auspicious day of Guru Purnima, Gautam Buddha delivered his first teaching or sermon to his first five disciples and after that, he moved from Bodhgaya to Sarnath.  On the other hand, according to Jainism, on the special day, Lord Mahavira became the 'Guru' to his first disciple Gautam Swami. However, according to ancient history, the special day of Guru Purnima is also celebrated by the farmers.

Devotees offer prayers to their Gurus. Vyas Puja is also celebrated in various parts of the nation.  As a token of respect, devotees offer gifts, flowers to their gurus. Throughout the day, devotional hymns, recitals and songs are being chanted. In the guru's memory, the holy text of Guru Gita is recited. Mantras are also enchanted. Buddist monks meditate and practice other holy rituals on the auspicious day of Guru Purnima.

(The above story first appeared on LatestLY on Jul 08, 2021 02:56 PM IST. For more news and updates on politics, world, sports, entertainment and lifestyle, log on to our website latestly.com).