Hartalika Teej is a Hindu festival celebrated by women across northern parts of the country. On the festival, women and unmarried girls worship Lord Shiva and Goddess Parvati for marital bliss. 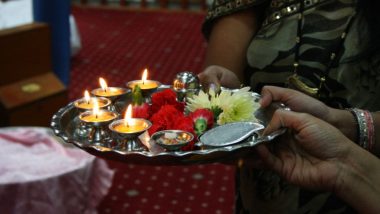 Hartalika Teej is a Hindu festival celebrated by women across northern parts of the country. It falls during Shukla Paksha Tritiya of the Hindu month of Bhadrapada. Hartalika Teej 2019 will be celebrated on September 1. On the festival, women and unmarried girls worship Lord Shiva and Goddess Parvati for marital bliss. The day is celebrated a month after Hariyali Teej and a day before Ganesh Chaturthi.  While Hartalika Teej is widely celebrated in north India, it is also observed in parts of Karnataka, Tamil Nadu and Andhra Pradesh where it is known as Gowri Habba. The festival has a popular story attached to it and is observed with varying celebrations.

Hartalika is a combination of two words 'Harat' meaning 'abduction' and 'Aalika' meaning "female friend".  While married women pray and fast on the day for marital harmony, unmarried women fast for prospective grooms in the future. The festival is known as Hartalika Teej due to a legend associated with it. According to Hindu mythology, Parvati was in love with Lord Shiva, but being an ascetic, he did not know about it. She performed penance on the Himalayas for many years making Shiva take notice of her. Understanding her love and affection towards him, he agreed to marry her. Hence, Parvati is worshipped as Haritalika. Mehndi Designs for Hartalika Teej 2019: Simple Arabic Mehandi Patterns and Easy Indian Henna Designs to Apply on Hands This Teej (View Photos and Videos)

Tritiya tithi begins: 8:27 am on September 1

Women stay awake throughout the night chanting prayers and hymns of Shiva and Parvati. They go on a complete fast and not even drink water during the day. The fast is called 'Nishivasar Nirjala Vrat' and is broken only the next day. Women dress in beautiful sarees and apply mehendi (henna) on their palms and feet. Married women visit their maternal homes and seek the blessings of elders. They also offer coconut to relatives.

(The above story first appeared on LatestLY on Aug 29, 2019 01:09 PM IST. For more news and updates on politics, world, sports, entertainment and lifestyle, log on to our website latestly.com).