When Is Father’s Day 2022? Date, Significance and History of This Special Day for Super Dads Everywhere! 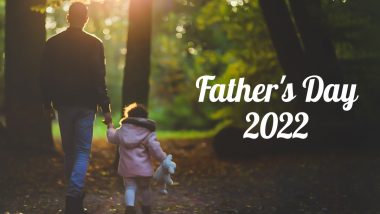 Fathers represent strength and courage, and they embody compassion. You rely on them for support, validation and advice, and they indeed are your first best friend. Fathers are exceptional, and they deserve to be celebrated. Father’s Day celebrates the paternal bond, fatherhood and father figures in one's life. Father’s day is celebrated on the third Sunday of June in the US and most countries. Here's everything from the date and significance to the history of Father’s day that you need to know about. When Is Mother’s Day 2022? Date, Significance and History, Know Everything About This Special Day Celebrating Mothers.

History And Significance of Father’s Day

Father’s Day came into existence in 1909 after a woman named Sonora Dodd of Spokane, Washington, decided to celebrate a day in honour of her father, a Civil War veteran who raised her and her other five siblings after their mother passed away during childbirth. The idea to celebrate Father’s day came into Dodd’s mind while she listened to a sermon in Church about Mother’s Day, around the same time it was gaining momentum. Religious groups and local authorities also agreed to the idea. The day even got a nod of approval from U.S President Calvin Coolidge in 1924 and President Lyndon B. Johnson in 1966. The day gained official status when in 1972, President Richard Nixon signed legislation dedicated to this holiday.

Father’s Day is also said to have its origins in some religious texts; according to Britannica.com, Roman Catholics have continued to celebrate the feast of St. Joseph on June 19 as a tribute and homage to fathers.

Father’s Day in modern times has gained popularity and attracted commercialisation of the celebration by gifting specialised gifts, merchandise and hampers to fathers on this day.

People celebrate this day by taking their fathers out for meals and picnics. Giving unique gifts and customised hampers with greeting cards is a prevalent tradition on Father’s Day.

(The above story first appeared on LatestLY on May 08, 2022 08:31 AM IST. For more news and updates on politics, world, sports, entertainment and lifestyle, log on to our website latestly.com).